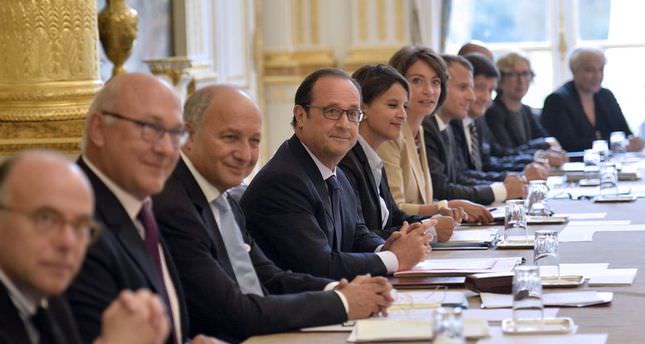 by AA Aug 29, 2014 12:00 am
France's new government will be ready to face a parliamentary vote of confidence in the next two months, Prime Minister Manuel Valls said.

Speaking at France 2 on Tuesday evening, hours after the announcement of his new cabinet, Valls said the parliament would judge the new government on its "work program."

He expressed confidence in the government winning the vote. "The majority, it will be there, it cannot be otherwise," Valls said.

He defended his much-criticized economic policy as "a balanced approach that will produce results, but it takes time ...There is no other policy."

Hollande had to request the formation of a new cabinet after the government fell apart on Monday.

The new government is said to have been formed in line with his "direction" and is seen by analysts as Hollande's last chance to save his five-year term as president.

Asked if Marcon, an ex-banker, could cope with the pressure of the job, Valls said: "Emmanuel Macron is a socialist...he is an ex-business banker? So what?"

If the new cabinet fails to get the support of lawmakers, Hollande and France face a political crisis that could lead to the dissolution of parliament and a snap election.