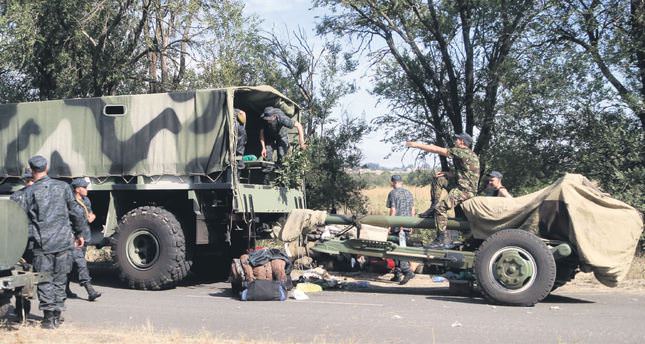 A new front of fighting has opened in southeastern Ukraine with Russian army units allegedly crossing the Ukrainian border to support the separatists, prompting fears of a Russian invasion

Following significant advances against pro-Russian separatists in the besieged eastern cities of Donetsk and Luhansk, the Ukrainian forces are now battling on a new front on the southeastern part of the country. The rebels have been moving towards the south with the alleged support of Russia, including Russian tanks and armored personnel carriers. Recently, the quiet border town of Novoazovsk, more than 100 kilometers south of Donetsk, was captured by the rebels.

Despite Russia's denial of covertly supporting the separatists in eastern Ukraine, the widespread reports of Russian troop movements shows that Russia is "directly involved" in clashes between Ukrainian government forces and the rebel groups, the U.S. ambassador in Kiev stated Thursday, according to AFP news agency. The Organization of Security and Cooperation in Europe (OSCE) held a special meeting on Thursday on Russian violations of Ukraine's territorial integrity. "An increasing number of Russian troops are intervening directly in fighting in Ukrainian territory," the U.S. Ambassador claimed, adding that Russian authorities sent its "newest air defense systems including the SA-22" in order to help the rebels seize control over large swathes of territories in eastern Ukraine. In addition, Kiev authorities claimed that a battalion of Russian soldiers reportedly set up a military headquarter near the village of Pobeda, in the southeast of the city of Donetsk.

As the pro-Russian rebels have been moving towards the south, it is believed that the latest move was seen as "to secure a land bridge to Crimea," the autonomous Ukrainian peninsula annexed by Moscow in March. Regarding Russia's possible invasion of the Ukrainian territory, U.S. State Department spokesperson Jen Psaki stated that the latest Russian troop advances into the south of the country "is of deep concern for [the U.S.].
There were reports of additional columns of Russian tanks, multiple rocket launchers and armored vehicles pushing towards communities in southeastern Ukraine…We've also seen reports of separatists shelling residential areas in a coastal town between the border and Mariupol. And we have seen reports of heavy fighting and shelling near the city and airport in Donetsk. These incursions indicate a Russian-directed counteroffensive is likely underway in Donetsk and Luhansk," Psaki stated on Aug. 27.

Referring to the Russian soldiers fighting alongside the rebels, Psaki also stated, "We're also concerned by the Russian Government's unwillingness to tell the truth even as its soldiers are found 30 miles inside Ukraine. Russia is sending its young men into Ukraine but are not telling them where they're going or telling their parents what they're doing." Despite claims over Russian support, pro-Russian separatist leader Alexander Zakharchenko asserted that Russian soldiers have been fighting Ukrainian troops alongside the rebels, Russian state television reported, according to Reuters.

Meanwhile, the Russian aid mission, which has long been a controversial matter between Ukraine and Russia, entered into the Ukrainian territory without Kiev government consent. The Ukraine government had denied the access of a convoy of 280 Russian trucks reportedly carrying aid for the war-torn east to enter the Ukrainian territory, suspecting that the Russian mission "could be a covert military operation."

Russian Foreign Minister Sergei Lavrov said that there will be more Russian aid convoys send to eastern Ukraine due to the fact that eastern towns have been in dire need of humanitarian assistance, according to Russian news agencies. However, Ukrainian officials stated that they have not yet been notified by Russian authorities about a new Russian aid mission.

Since the hostilities erupted in eastern Ukraine, more than 2,200 people have been killed during heavy clashes between the armed groups. According to the U.N., the death toll has sharply increased, as at least 36 people are reported killed every day. The sharp increase in fighting between pro-Russian separatist rebels and the Ukrainian army to take control of eastern Ukraine has caused a significant number of Ukrainians to find shelter from Ukraine's war. Many have been forced to flee the war to the other parts of the country or chose to cross into neighboring Russia. For those who stayed, the humanitarian situation has gotten worse since the "antiterrorist operation" was launched by the Kiev government several months ago.
Last Update: Aug 29, 2014 10:52 am
RELATED TOPICS