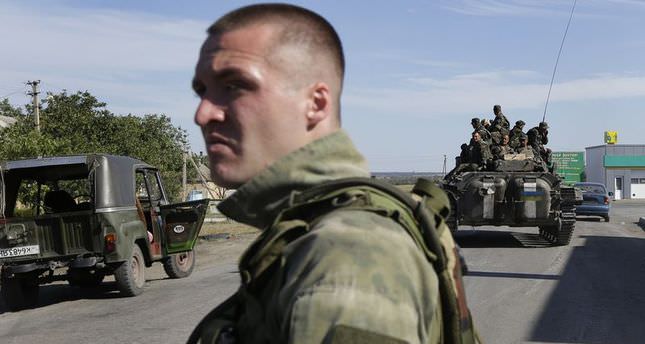 by Aug 31, 2014 12:00 am
Pro-Russian separatists were preparing a fresh offensive on a key coastal location in eastern Ukraine on Sunday, as EU leaders gave Moscow one week to curb its support for the rebels or face new sanctions.

A ragtag mix of volunteer battalions and local residents were bracing for a desperate defence of Mariupol, a strategic port city and the last big town in the region still under Ukrainian control.

"We can hold them off, but for how long? We don't have the strength to beat them," said Panther, a tattooed fighter with the Azov battalion, said to be one of the most radical nationalist groups fighting in the area.

The renewed rebel assault of the past week has raised fears in Brussels that the conflict in eastern Ukraine could descend into a "full-scale war" with Russia that risks engulfing the entire continent.

The European Union agreed to take "further significant steps" if Moscow did not rein in its support for the rebels, EU President Herman Van Rompuy said on Sunday after a meeting of the bloc's 28 heads of state.

They ordered the European Commission, the EU's executive arm, to draw up options for new sanctions within a week.

"Everybody is fully aware that we have to act quickly given the evolution on the ground and the tragic loss of life of the last days," Van Rompuy told a news conference.

Russia has flatly denied any involvement in the fighting and says any Russian troops in Ukraine are volunteers on holiday.

British Prime Minister David Cameron warned Moscow that "if she carries on in this way the relationship between Europe and Russia, Britain and Russia, America and Russia will be radically different in the future."

"Today we are talking about the fate of Ukraine, tomorrow it could be for all Europe."

Lithuania's President Dalia Grybauskaite, whose Baltic nation is wary of the resurgent power on its eastern border, warned that "Russia is practically in a state of war against Europe" and urged EU military assistance to Kiev.

Poroshenko said he expected the West to increase its weapons contributions to Ukraine following discussions at a NATO summit in Cardiff on Thursday and Friday.

Those hoping for a tough line on Russia were emboldened by the announcement on Saturday that Polish Prime Minister Donald Tusk, a vocal Kremlin critic, has been chosen to replace Van Rompuy as the EU's next president.

Although Russia continues to deny direct involvement in the conflict, there have been media reports of secret military funerals for those sent to fight in Ukraine.

On Sunday Russian media quoted a military official saying that a prisoner swap had taken place at the northeastern border with Kharkiv region.

Ten Russian paratroopers were exchanged for 63 Ukrainian soldiers who had crossed the border last week, said Major General Alexei Ragozin, deputy commander of Russia's Airborne troops that Kiev has accused of heavy involvement in the fighting.


The past week has seen a renewed rebel offensive around Ukraine's Azov Sea, pointing to a possible attempt by Moscow to establish a corridor between Russia and the Crimean peninsula it annexed in March.

Volunteers manning the barricades at Mariupol fear their trenches and barbed wire will be little match for the insurgents' tanks, but recognise the importance of their task.

"It is the last big town in the region under Ukrainian control, home to half a million people," commander of Ukraine's Azov battalion, Andriy Biletskiy told AFP.

The rebels have advanced swiftly along the coast, capturing the nearby town of Novoazovsk last Wednesday, just one day after Poroshenko met with Russian President Vladimir Putin for talks that failed to achieve any breakthrough.

Poroshenko said on Saturday that fresh peace talks grouping representatives of Kiev, Moscow and the Organization for Security and Cooperation in Europe (OSCE) would take place in Minsk, the capital of Belarus, on Monday.

But on the ground there was no sign of a let-up in the fighting, with Alexander Zakharchenko, prime minister of the self-proclaimed Donetsk People's Republic, telling Russian media on Saturday that the rebels were "preparing a second large-scale offensive."