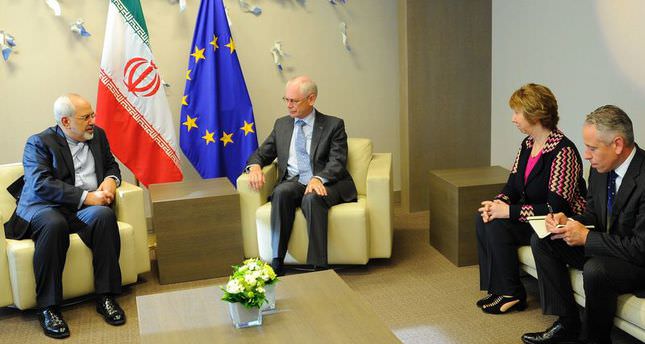 Ashton, the EU foreign policy chief, has shepherded year-long talks between Iran and major powers, aiming for a comprehensive deal to end a decade-long dispute over the Islamic republic's nuclear activities.

The negotiations suffered a setback in July when a target date for an agreement was missed and the talks were extended for four months. November 24 is the new date for a final settlement.

Zarif will meet Ashton for a working lunch, Iran's official IRNA news agency said. He was accompanied by two of his deputies, Abbas Araqchi and Majid Takht-Ravanchi, both members of Iran's negotiating team.

Ahead of their departure from Tehran, Araqchi talked up the chances of a deal in an interview with state media.

"The suggestion of an impasse in the negotiations is not correct," he told Iran, a government newspaper.

"There are key questions and if we answer these, it will address other issues as well. Hopefully we can reach a common understanding by November."

The biggest disagreement is on the amount of uranium enrichment Iran would be allowed to conduct under a deal with the West. There is a massive gap between the two sides on what is acceptable.

In exchange for nuclear curbs, Iran wants a vast array of US, EU and UN sanctions to be lifted.

Araqchi said Iran wants any agreement to be approved by the UN Security Council "in the form of a resolution," which would ensure sanctions were ended.

"American lawyers assure us that the US president can suspend all sanctions of Congress and the (US) political team endorsed this view," Araqchi added.

Monday's meeting with Ashton precedes a resumption of the talks between Iran and the powers on the sidelines of the UN General Assembly in New York later this month.

After his meeting in the Belgian capital, Zarif will head to Luxembourg and then to Italy for talks with Foreign Minister Federica Mogherini, Ashton's recently-appointed successor, IRNA said.

Iran and the P5+1 group of Britain, China, France, Russia, the United States plus Germany re-opened talks on the nuclear issue last year, following the election of President Hassan Rouhani.

An interim deal was struck last November and although hopes for a final agreement remain high, recent months have seen a slowing of momentum and the new US sanctions have angered Tehran.

Mistrust of the US has further deepened because of fresh measures targeting dozens of Iranian individuals and entities, including shipping and oil companies, banks and airlines, Rouhani said on Saturday.