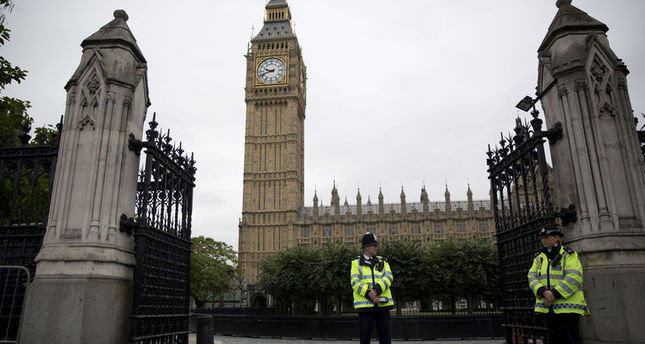 by AA Sep 01, 2014 12:00 am
Britain's prime minister is expected to announce new anti-terror legislation Monday to deal with what the government considers to be the threat British passport holders fighting in Syria and Iraq pose in returning to the United Kingdom.

Fresh from the U.K. terror level being raised to "severe" from "substantial" Friday, David Cameron is reported to be in talks with coalition partners the Liberal Democrats - traditionally opposed to restrictions on civil liberties - and is expected to make a statement to Parliament later Monday, after measures have been agreed.

Among those measures being discussed is a proposal put forward by lawmakers for the passports of those suspected of fighting in the two war-torn countries to be seized - a move which International law, including the UK ratified 1954 UN Convention on Stateless Persons and the 1961 U.N. Convention on the Reduction of Statelessness - prohibits.

Conservative Member of Parliament Sir Edward Garnier told BBC Radio 4's Today program Monday that the expected measure would be nothing new as the Government already had powers to take away the passports from those they suspected of traveling to Syria.

"Parliament can pass any law it likes, but the government is bound by at least two U.N. conventions on statelessness and it seems to me that the Government already has many laws in its locker which it can use."

He added that the government needed to proceed with caution.

In April this year, Britain's upper chamber voted to change government plans to give the Home Secretary power to strip terror suspects of their British nationality.

Currently, citizenship can be removed if the individual is a dual national and would not become "stateless."

The coalition government has stripped several citizens of their nationality; in one case Conservative Home Secretary Theresa May stripping an Iraqi-born man in 2007 following his arrest in Iraq by American forces and then transfer to British forces - by whom he was held without charge for three years.

He was later released without charge, the U.K. Supreme Court ruling that stripping the man's citizenship was "unlawful." However, Theresa May stripped him of his nationality a second time as she appealed the Supreme Court decision.

The Guardian newspaper reported Monday that other new measures that may be introduced include making it easier for intelligence agencies to access information on airline passengers, legislation to tighten terrorism prevention and investigation measures, and more cooperation with Turkey and Germany to prevent fighters from returning to the U.K.

Fighters from the self-proclaimed Islamic State of Iraq and al-Sham (ISIS), which already have control of parts of Syria, captured the northern Iraq city of Mosul in June and then surged across the north, taking control of a number of predominantly Sunni cities.

In August, the group claimed to have executed American journalist James Foley in a video that apparently showed his beheading by a man who appeared to be speaking in a British accent.