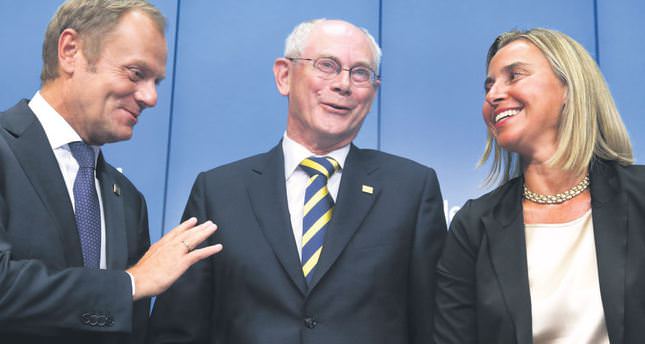 Amid the European Union's call for more restrictive measures toward Russia to stop Ukraine aggression, Polish Prime Minister Donald Tusk was named as the new EU Council president and Italian Foreign Minister Federica Mogherini as the new EU foreign policy chief. The new top posts were announced on Saturday in an EU summit. However, how EU's policies on Russia during the Ukraine crisis would be affected by the new top positions remains unclear, as critics asserted that the Italian FM's stance toward Russia has not been strong enough to impose tighter measures.

The outgoing Council President Herman Van Rompuy announced in a press conference in Brussels on Saturday that Polish PM Tusk will replace Van Rompuy in November and Italian PM Mogherini was appointed in place of Catherine Ashton. "Mogherini will be the new face of the union in our day-to-day dealings with international partners," Van Rompuy said.

The newly-appointed EU foreign policy chief Mogherini made her first comment on EU's policies toward Russia, saying that "As we think and we work on the level of sanctions, we also have to keep the diplomatic way open ... hoping that a combination, a wise combination, can be effective," she said, reiterating the need for open dialogue between two parties.

Federica Mogherini, the 41 year old Italian FM who is now in charge of the EU's foreign policy, has been criticized over her lack of experience and her soft stance toward Russia. The criticism came mainly from the Baltic countries due to the Italian government's feeble efforts to solve the Ukrainian crisis. According to the views opposing Mogherini's candidacy, it is asserted that Mogherini's arrival to one of the top EU positions would be seen as bad timing", as the EU has yet to present its toughest measures to Russia regarding clear evidence of Russian military units operating inside Ukraine to help pro-Russian separatists in eastern Ukraine.

The appointment of Polish PM Tusk as president of the European Council shows that the influence of the eastern EU states on EU's policies would be greater, especially over the EU's diplomatic efforts to ensure stronger measures on Russia over the Ukraine crisis. Yet, many western countries would be likely to divide over tightened sanctions due to fear of damaging their own economies. Some of them, like Germany and Italy are heavily reliant on Russian gas.

For France, the tough measures were seen as a direct challenge for building two warships for the Russian navy worth 1.2 billion euros (TL 3.40 billion). In June, European leaders discussed new EU sanctions against Russia while introducing a new set of six restrictive measures including suspension of financing operations, restricting investments in Crimea in line with the policy of non-recognition of the illegal Russian annexation of Crimea and Sevastopol. "Tier 3" sanctions - hard-hitting sanctions targeting Russian gas and oil and imposing an arms embargo on Russia - has been on the EU agenda.

Amid growing hostilities in eastern Ukraine between Russian-backed separatist groups and Ukrainian government forces, the EU leaders are set to threaten Russia over imposing newly-tightened sanctions. "We continue to urge Russia to stop all hostilities, to stop the flow of arms, equipment and personnel into the conflict region, and to withdraw its forces from Ukraine," the European Union's foreign policy chief Catherine Ashton said after a two-day meeting with EU foreign ministers in Milan, Italy, while stressing "deep concerns about the recent aggression against Ukraine by regular Russian military forces."

Regarding the alleged Russian incursion into Ukraine soil, the Ukrainian president, Petro Poroshenko, stated that the ongoing conflict has been pushed to a 'point of no return', while calling on European leaders for a stronger response in order to halt aggression and terror within the borders of Ukraine. "Thousands of foreign troops and hundreds of foreign tanks are now in the territory of Ukraine," said the Ukrainian president, while giving a briefing to reporters about the EU summit in Brussels on Saturday.

Following the failure of talks in Minsk, Belarus, between Ukraine and Russia over reaching a concrete agreement in order to put an end to the hostilities, Ukraine's president accused Russia of deploying its troops within Ukraine's borders and called for an urgent National Security Council meeting. The Ukrainian forces battle with pro-Russian separatist groups in a new front on the southeastern part of the country, signaling increasing hostilities in the turmoil-stricken east of the country.

Since the fierce conflict erupted in April, at least 2,220 people were reportedly killed and 5,956 injured, according to United Nations reports.
Last Update: Sep 01, 2014 5:11 pm
RELATED TOPICS