Putin urges EU to have 'common sense' over sanctions threat 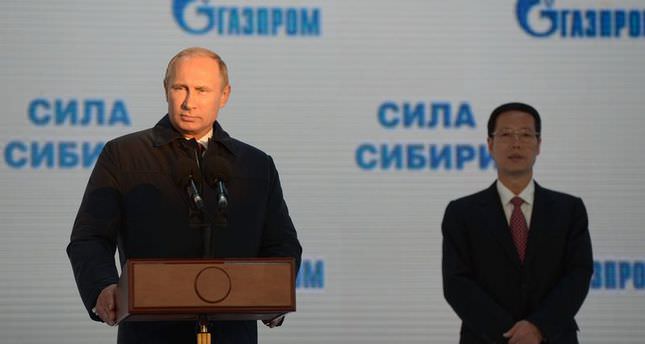 by Sep 01, 2014 12:00 am
Russian President Vladimir Putin urged the EU on Monday to show "common sense" and not to engage in mutually destructive sanctions, in his first reaction to the threat of additional punitive measures over Ukraine.

"I hope that common sense will prevail... that we will work together normally and that we and our partners will not cause harm by poking at one another," Putin was quoted as saying by Russian news agencies during a visit to the eastern Siberian city of Yakutsk.

He later warned that sanctions would rebound on the West.

"Concerning restricting trade and economic activity, those who pursue such policies will suffer the most," said Putin.

The remarks came a day after European Union leaders gave Russia a week to reverse course in Ukraine or face a new round of sanctions.

Fears are growing that the confrontation could engulf the whole continent after Russia allegedly sent troops to back a new offensive by pro-Kremlin rebels in southeastern Ukraine.

Russian officials have said previously that they were preparing countermeasures in case of new Western sanctions, after having last month banned most EU and US food imports.

But Foreign Minister Sergei Lavrov earlier Monday said that Russia would not "slam the door shut" on Western trade nor exit from the World Trade Organisation.

"We will, above all, proceed from our own interests, defend our economy, defend our social system, defend our businesses," Lavrov told Moscow university students.

Sanctions threats and reports of Russian tanks being involved in fighting outside of Lugansk sent the ruble to a new record low of 37.51 against the dollar in afternoon trading.

"Clearly, that kind of environment spoils even the near-term outlook," they added.

Previous sanctions, which targeted Kremlin-linked figures and limited access of state-controlled banks and companies to Western financial markets, have not had a severe impact nor swayed Russian policy.

The threat of sanctions, however, sent sentiment plunging and sparked a surge in capital flight that has starved the Russian economy of the investment it needs and brought it to the brink of recession.

This time the Russian market is concerned over the possibility that banks could be excluded from the SWIFT system for international financial transactions as part of the next EU sanctions, which officials are to elaborate during the course of this week.

Banning Iran from the system in 2012 damaged the country's economy but is widely seen as having helped bring the Islamic Republic back to the negotiating table over its contested nuclear programme.

"If that does in fact take place, a significant part of Russian banks' foreign transactions will simply be paralysed," former economy minister Andrei Nechayev said on Moscow Echo radio over the weekend.

But Alexander Kareyevsky, a financial commentator for Russia24 TV, warned that the measure is a double-edged sword.

"If you take into account that trade in oil and gas is done in dollars, then being cut off from SWIFT will immediately cause serious problems in making payments for those strategic goods, which are also important for the West," he said on Saturday.