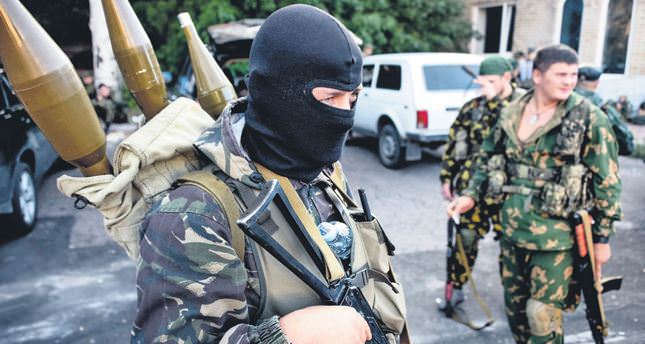 Russian President Vladimir Putin on Sunday called on Ukraine to immediately start talks on a political solution to the crisis in eastern Ukraine. Hours later, Ukraine said a border guard vessel operating in the Azov Sea was attacked by land-based forces. Pro-Russian rebels have recently opened a new offensive along the seacoast. Putin's comment, made to national TV network Channel 1, said Ukraine should "hold substantive, meaningful talks, not about technical issues but about the question of the political organization of society and statehood in southeast Ukraine, with the goal of safeguarding the legitimate interests of those people who live there."

Despite the use of the word "statehood," Putin did not envision sovereignty for the two separatist eastern regions that style themselves as "Novorossiya" (New Russia ), his spokesman Dmitry Peskov said later, according to a Russian news report. Putin's comments came a day after leaders of the European Union decided to put off any new sanctions against Russia for at least a week.

On Sunday, a spokesman for Ukraine's offensive against Russia-backed rebels said a border guard vessel has been fired on with artillery apparently the first incident at sea in the fighting. The spokesman, Oleksiy Dmitrashkovsky, said the attack occurred Sunday afternoon but he had no further information, including how many people were aboard the boat. The attack took place amid heightened concern that the rebels are trying to seize a land bridge between Russia and the Crimean Peninsula, which Russia annexed in March. Until this week, the area along the Azov Sea had escaped the fighting that has gripped areas farther north since April.

Meanwhile, two prominent U.S. senators said Sunday that the Obama administration should not only push for tougher sanctions on Russia, but should also send weapons to help Ukraine defend itself. "We should be providing the Ukrainians with the type of defensive weapons that will impose a cost on Putin for further aggression," Democratic Sen. Robert Menendez, chairman of the Senate Foreign Relations Committee, said on CNN's "State of the Union." Menendez, speaking from the Ukrainian capital Kiev, added, "This is a direct invasion by Russia. And we must recognize it as that." He said the issue of supplying weapons to Ukraine "may be very well on the table right now" for the Obama administration considering "these are changed circumstances."

Sen. John McCain said that if unchecked in Ukraine, Russia could begin to threaten other nations in Eastern Europe, including Moldova and the Baltic states, former Soviet republics. McCan denied that providing weapons to Ukraine could make things worse. "For God's sake, can't we help these people defend themselves? This is not an incursion, this is an invasion," McCain said on CBS' "Face the Nation." ''Give them the weapons they need, give them the wherewithal they need, give them the ability to fight. They will fight. "Russia previously has called for talks between the central government and the separatist rebels in the east, which Ukrainian forces have been fighting since April and Russia has pushed for federalization that would devolve more powers to the regions.

Ukrainian President Petro Poroshenko released a peace plan in June that proposed an unspecified level of decentralization of executive powers and budgetary matters. But rebels so have rejected any talks unless Ukrainian forces halt their offensive. Putin said Ukraine should stop the offensive. "If anybody believes that in a situation where the cities and villages of east Ukraine come under direct fire that the militiamen will have no reaction to that, but will simply wait for the promised talks, then these people are prisoner to some illusions," he said. His statement comes as Ukrainian forces battle against newly strengthened resistance from the rebels.

After making gains in recent weeks, Ukraine has been forced to pull out of several towns over the past week. Residents began returning to their homes Sunday in areas vacated by retreating Ukrainian forces.

In the village of Hrabske, Alexander Bezpalko and his son worked to salvage parts from a burned-out Ukrainian tank. "My home was leveled and I need to rebuild it somehow," Bezpalko said. "This heap of junk is scrap that I can make some money from. Everything is destroyed and there is no work."

There is barely a street in Hrabske and the nearby town of Ilovaysk left unscarred by artillery strikes. The bitter fight for Ilovaysk and surrounding areas lasted the best part of a month. On Saturday, the government conceded its inevitable defeat as its armed forces were surrounded and under relentless attack.

This week, Ukraine seized 10 Russian soldiers well inside the country. On Sunday, Col. Andriy Lysenko, a spokesman for the national security council, said nine of them had been given back to Russia in exchange for 63 Ukrainian servicemen. "Ukraine has made a step forward," Lysenko said of the release. "This is one of the major steps towards the Russian Federation they were not taken to court, they were transferred."
Last Update: Sep 02, 2014 10:05 am