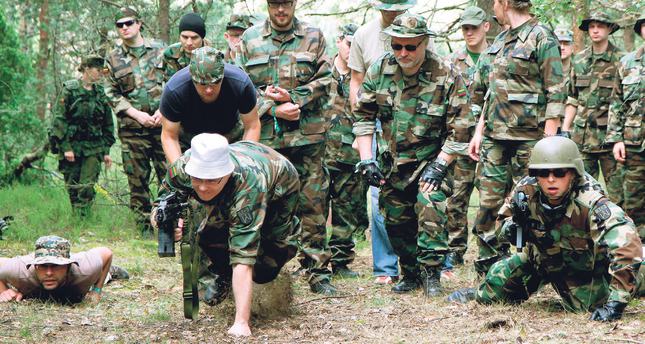 After Russian denial, Ukraine renounces its cease-fire decleration against Russia. Russia continues to spread fear among ex-Soviet states, causing many to join paramilitary groups due to security concerns

There are still no signs on the ground of a halt in the fighting between Kiev's forces and pro-Russian separatists in war-torn eastern Ukraine, despite Ukraine's ineffective attempt to reach a truce with Russia to resolve the months-long crisis. Even though the Ukraine presidency claims that the two sides have reached a permanent cease-fire agreement over the Ukrainian crisis, Russian authorities denied a possible cease-fire. "Putin and Poroshenko really discussed the steps that would contribute to a cease-fire between the militias and the Ukrainian forces. Russia cannot physically agree to a cease-fire because it is not a party to the conflict," said Russian news agency RIA, quoting President Putin's press secretary, Dmitry Peskov.

Peace in separatist-held areas seems hard to achieve, as talks of a possible cease-fire are on volatile ground. Russia's assertive policies in the Ukraine crisis -- sending its troops and backing rebel groups in eastern Ukraine -- has increased the tension, thereby deteriorating bilateral relations between Kiev and Moscow since hostilities erupted in April. The Russian annexation of Crimea in late March and the increasing signs of its involvement in eastern Ukraine have prompted fears among Western countries, mainly the ex-Soviet countries in Eastern Europe. Lithuania is one of the main ex-Soviet countries that perceives Russia as a main security threat.

Against a possible security threat from Russia, Lithuanian civilians are lacing up their own combat groups by reviving its paramilitary group, dubbed the government-sponsored Lithuania Riflemen's Union. This nationalistic paramilitary organization was first founded in 1919 and dissolved in 1940 during Soviet times.

The guerilla group is to train civilians to give support to the Lithuanian Armed Forces in case of any aggression. Reportedly, "7,000 members in the nation of three million, a number almost on par with its 7,000 military personnel and 4,200 reservists," have joined the paramilitary organization. "The Vilnius unit has tripled in size since the beginning of the crisis in Ukraine," Mindaugas Balciauskas, the unit commander of the group, told AFP news agency. "Being in a paramilitary unit gives me privileged access to information and makes me better prepared than those who don't join," said Arturas Bortkevicius, a 37-year-old finance specialist, stressing the need "to learn the skills he needs to defend his country and family."

In relation to the revival of paramilitary organization forming to meet the Russian threat, (referring to an article about far-right European militants joining the Ukrainian civil war, published by the Daily Sabah on Aug. 14), there has been a growing trend to join paramilitary groups in Ukraine to protect Ukrainian territorial integrity against pro-Russian separatists in the war-torn east of the country. Ukrainian armed forces and far right wing militias have long been trying to capture rebel-held territories.

Amid Ukraine's crisis and ongoing damaged EU-Moscow relationship, Dalia Grybauskaite, Lithuania's first female president and a former EU budget chief, has been seen by many Lithuanians as the only candidate who is able to fight against Moscow's destabilizing attempts in the Baltic region. Known for her tough stance over Russia, Grybauskaite has urged NATO to boost its presence against the Russian threat in the region due to security concerns.

Lithuania became both an EU and NATO member state in 2004. Its relationship with Russia has been deteriorating since Lithuania's independence in 1990. Since then, Russia has worried about eastward enlargement by the EU and NATO after three Baltic state's accession to the EU. Lithuania, having a border with the Russian exclave of Kaliningrad, has been of crucial importance for Russia.

Amid fears that the three countries would likely be the next target of Russian aggression, U.S.President Obama announced "additional air force units" for Baltic air policing in attempts to strengthen Baltic countries' military capabilities against the Russia threat.Speaking in Tallinn, Obama pointed out the disputed cease-fire process between Ukraine and Russia, saying: "It's too early to tell what the cease-fire means. ... We have consistently supported the efforts of President Poroshenko to achieve a meaningful cease-fire in the conflict."

He also reiterated, "No resolution to the Ukraine conflict is possible as long as Russia continues to [back separatist groups]."During heavy clashes, the death toll in eastern Ukraine has reached at least 2,600, as the deteriorating humanitarian situation has led to many people being internally displaced.