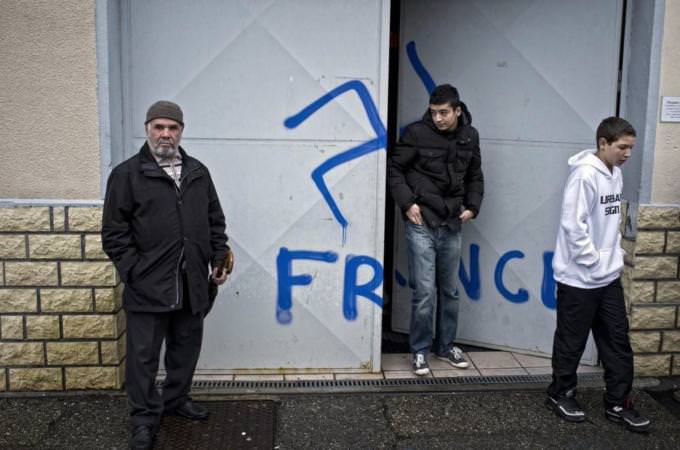 by Begüm Tunakan Sep 05, 2014 12:00 am
ISIS militants are spreading fear, promoting Islamophobia in French society, as recent incidents show that there is a growing intolerance in France towards the Muslim community France, home to the largest Muslim population in European with an estimated 8 million Muslims, is now suffering from increasing intolerance due to ISIS militants, prompting fear among French society. Two recent cases prove that the ISIS threat has sparked some to discriminate against local Muslim communities living in Europe.

France's new Minister of Education, Najat Vallaud-Belkacem, was targeted by a French far-right magazine, Minute, for her religious and ethnic background. As a Muslim woman, she has found herself coming in for harsh criticism over the last week with most being racially motivated verbal attacks. "I call for respect," Belkacem told the Associated Press in an email, adding, "I repeat in particular that racism is not an opinion, but a crime."
She was promoted after the reshuffle of the French cabinet, a move that protected France from serious political chaos.

Another case that shows growing Islamophobia was the move by a French court in Châlons-en-Champagne that banned a Muslim engineer from working for a firm subcontracted by French energy giant EDF, the world leading energy supplier, from accessing French nuclear sites. The 29-year-old project manager, who had been granted access to nuclear installations, has now been denied access to the Nogent-sur-Seine nuclear power station. The decision was given by the local administration on the grounds that the Muslim engineer has alleged ties with ISIS militants. The authorities have not yet given any public justification for the decision, as the French law covers the decision as a "defense secret." "My client worked freely in French nuclear power stations for three years," his lawyer Sefen Guez Guez told FRANCE 24. He said: "The question now is - what changed? Overnight, he became a suspect, and no one has any idea why. That's what we're trying to get to the bottom of," while linking the current situation to growing Islamophobia incidents in French society due to security and safety concerns. "He has never done anything amiss at work, he is not facing any disciplinary issues with the EDF, and he has no criminal record," said Guez. "How can an employee in France be forbidden from doing his work without being able to defend himself and not even knowing what he has supposed to have done wrong?" he added.

ISIS militants continue to prompt fears in Europe, especially among French citizens, after a British citizen was taken captive by the militant Islamic group. Their brutal behavior towards non-Muslim people has presented a danger that few European countries have seen before. After the beheading of two American journalists, ISIS has threatened Britain over a British hostage who is an aid worker in Muslim Balkan countries.

Regarding ISIS' effective recruitment drive, France, after Britain, is the most troublesome country in Europe, as a growing number of French citizens - mostly from immigrant backgrounds - have gone to Syria and Iraq in order to join ISIS militants. A poll conducted by ICM in August analyzed the growing sympathy among French citizens towards ISIS. It was revealed that 16 percent of French citizens have a positive attitude towards ISIS. The percentage was even higher among younger French. The number shows that a majority of young French people, either unemployed or socially isolated and coming from immigrant origins, are better predisposed towards ISIS.

Muslims in France are mainly of North African descent, arriving in the country in the wake of France's decolonization in the 1950s and onwards. The 1970s "regroupement familiale" policy welcomed the families of migrant workers and thereby led the Muslim population a greater significance in the country. Many young Muslims who grew up in France have been highly affected by the massive unemployment and rampant social problems.