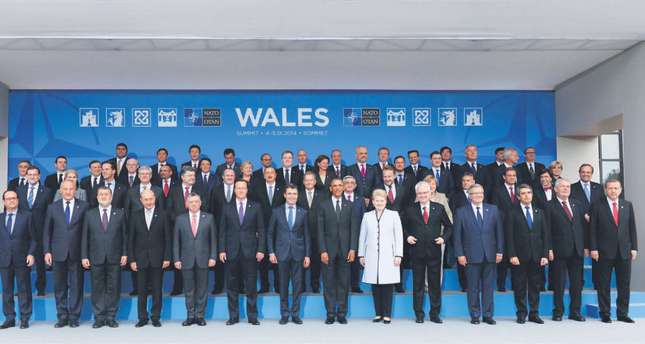 NATO-Russia relations have deteriorated more than ever amid Russian engagement in the Ukrainian war. Moscow, still a thorn in the side of the West, has become the center of discussion at the NATO summit

The 2014 NATO summit of heads of state, hosted by Britain, comes at a crucial time as security concerns have grown after threats to the alliance's borders. The meeting is being held amid a serious security crisis in eastern Ukraine, bringing Moscow back to its position as a problem for the West. Therefore, NATO's core function to defend European borders against Russian threats is now at the top of the agenda.

Ahead of the NATO summit, Ukrainian President Petro Poroshenko briefed the alliance leaders yesterday about a cease-fire plan while stressing the need for solid action from NATO to increase pressure on Russia to stop its aggression. Despite failed attempts to end the conflict in eastern Ukraine so far, NATO leaders will approve "high-readiness forces" along with the Readiness Action Plan to be deployed in Ukraine in 48 hours to fight a possible outside threat, in this case Russia.

Speaking before the summit's official launch, NATO Secretary-General Anders Fogh-Rasmussen reiterated the "dramatically changed security environment" in Europe, saying, "We are still unfortunately witnessing Russian involvement in destabilizing the situation in eastern Ukraine."
Russian's aggressive policies in Ukraine amassing its troops on the Ukrainian border and backing rebel groups in eastern Ukraine, has led to an increase in tension thereby deteriorating the bilateral relations between the West and Moscow since the hostilities erupted in April. The Russian annexation of Crimea in late March and the increasing signs of its involvement in eastern Ukraine have prompted fears among Western countries, mainly ex-Soviet countries in Eastern Europe, as Europe's eastern borders face a growing threat from Russia.

As Ukraine is not a member of NATO, there is no obligation for NATO member states to defend Ukraine from a Russian threat. However, Western powers decided to support Ukraine through military and technical assistance to Ukrainian military units with modernization programs. The Pro-Western Ukrainian government has accelerated the process for joining NATO due to Russia's disrespect for Ukraine's territorial integrity. Since the negotiation talks between Ukraine and NATO launched in 1994, Ukrainian membership in NATO was objected to due to political instability in Ukraine and the difficulty of defending Ukraine militarily against a possible Russian threat.

Now that Ukrainian membership has come to the forefront, Russia has warned Ukraine not to join NATO. Russian Foreign Minister Sergei Lavrov reiterated Russia's opposition to Ukraine joining NATO. Lavrov said Ukraine's membership could "derail all efforts aimed at initiating a dialogue with the aim of ensuring national security," while accusing the U.S. of undermining peace efforts in Ukraine.

Russian aggression in the Ukraine war has seen Moscow work to deteriorate the post-Cold War security order in Europe, which has been protected under the NATO-Russia founding act signed in 1997 in order to rebuild peace and security in the Euro-Atlantic area. However, the West and Kiev assert that Russia has blatantly breached the principles of the founding act, disregarding Ukraine's sovereignty, independence and territorial integrity, signaling a more strained relationship between Russian and NATO.

Consistently at odds, there has been a strained relationship between NATO and Russia due to conflicting interests between the two parties. Even in the post-Cold War period, the upcoming NATO summit proves that Russia remains the biggest challenge for NATO. Aside from the ongoing Ukraine crisis and Russian annexation of Crimea, there has been a long history of deteriorated bilateral relations. Recalling the Georgian war in 2008 and Russian recognition of the breakaway regions of South Ossetia and Abkhazia, tension increased after NATO military exercise in Georgia.

NATO's eastward enlargement after the fall of the Soviet Union led to increasing tension between Russian and the West, leading any future Russian aggression. Three former Warsaw Pact countries - the Czech Republic, Hungary and Poland joined NATO in 1999. This was followed by the three ex-Soviet Baltic countries and Balkan countries in 2004. Yet Europe still feels the Russian threat as NATO'S core function, "the defense of Europe against Russia" has remained the fundamental issue.