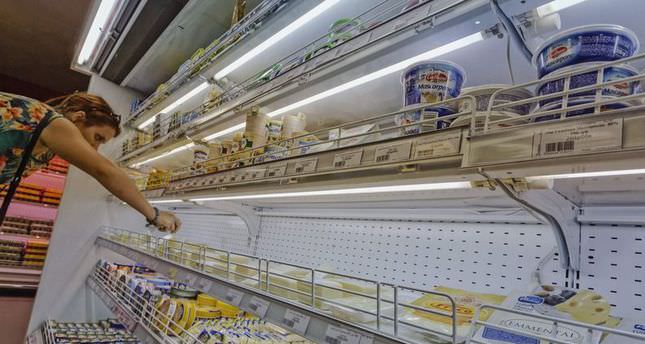 by AA Sep 09, 2014 12:00 am
EU leaders have agreed to impose a new list of sanctions on Russia over Russian intervention into the eastern Ukraine crisis. The sanctions are to be published in the EU's official gazette. Yet, whether the list of sanctions will be implemented is of crucial importance as it depends on the continuity of the cease-fire agreement and the peace talks between the Ukrainian government and the pro-Russian rebel groups. As the clashes have been continuing in some parts of eastern Ukrainian cities, the cease-fire has been held on volatile ground.

"The sanctions aim at promoting a change of course in Russia's actions destabilizing eastern Ukraine and come in the wake of the European Council of 30 August, which condemned the increasing inflows of fighters and weapons from the territory of the Russian Federation into Eastern Ukraine and the aggression by Russian armed forces on Ukrainian soil," the EU Council President Herman Van Rompuy announced in a written statement on Monday.

The new list of sanctions includes Russia's top oil producers and Russian firms limiting their access to European financial markets and precluding them from raising capital in Europe. In an effort to impose stronger measures against Russia, in order to disrupt the Russian economy as a whole, some large Russian enterprises close to Russian President Vladimir Putin, such as Novatek, Gazprombank and many others, have already been the main targets for both EU and U.S. sanctions. The three oil companies; Gazpromneft, OAO Gazprom, Transneft, and state-controlled Rosneft would be not be allowed to raise funds in Europe for no longer than 30 days. In addition, three military production companies; Oboronprom, United Aircraft Corperation and Uralvagonzavod would be barred from the EU. The proposed sanctions would also include Russia-backed separatist leaders in eastern Ukraine, the government of Crimea that was annexed by Russia in March. However, the list does not include the gas sector as the European countries, mainly Eastern Europe, has been largely dependent on Russian gas supplies.
The EU leaders have been long calling for "Tier 3" sanctions, hard-hitting sanctions aimed at hitting the Russian gas and oil industry and imposing an arms embargo. The EU sanctions against Russia have been considered "relatively mild" compared to "Tier 3" sanctions. The existing "Tier 2" sanctions have imposed travel bans and asset freezes on specific Russian businesses, individuals and organizations in Putin's inner circle in response to the annexation of Crimea and the ongoing crisis in eastern Ukraine. European leaders, with "Tier 3" sanctions, aim to block Russian access to European markets for whole sectors of the Russian economy, mainly gas and oil.

With regard to the EU-proposed sanctions, Russian authorities stated that it would continue to support Russian businessmen and their companies in an effort to ensure the Russian economy is less affected by the new sanctions. "This is the government's responsibility - to protect Russian business if it is facing unfair and unlawful actions by foreign states or foreign companies," Russian Prime Minister Dmitry Medvedev said, according to news agencies. Some of the big Russian companies like Novatek have been under tighten sanctions imposed by both the U.S. and the EU.

As a warning of retaliation, the Moscow government signaled a close to its airspace for Western aircrafts, as Russian Prime Minister Medvedev stated Monday, speaking to a local Russian newspaper. "We believe we have friendly relations with our partners, and foreign airlines of friendly countries are permitted to fly over Russia," Medvedev said. "However, we will have to respond to any restrictions imposed on us. If Western carriers have to bypass our airspace, this could drive many struggling airlines into bankruptcy," he said.

Meanwhile, as the cease-fire talk has been held on shaky ground, whether or not the truce holds is a crucial matter. Since the cease-fire was taken into effect, four Ukrainian soldiers have reportedly been killed during the heavy clashes in Donetsk airport and the crucial port city of Mariupol. After the Kiev government started military operations in rebel-held eastern cities of Donetsk and Luhansk to restore Kiev government control, the West has accused Russia of backing and financing separatists – a charge that Russia completely denies. The tension over the Ukraine crisis has led to significant confrontation between the West and Russia.