Scotland vote goes down to the wire 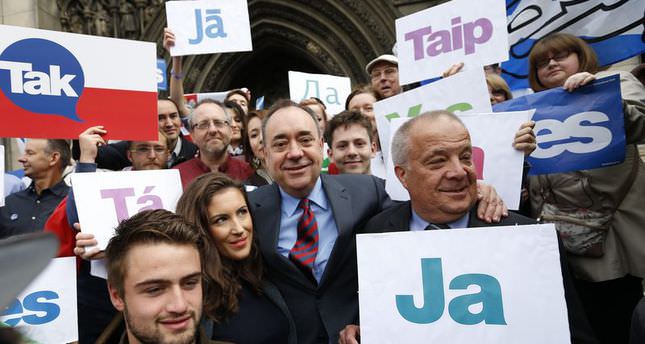 by Daily Sabah Sep 10, 2014 12:00 am
Scots are preparing to cast their votes in a historic referendum to end the 300-year-old union with the U.K. Recent polls showed the Yes and No campaigns are now even with 39 percent of Scots favoring a No vote compared to 38 percent who support Scotland's independence. The latest poll results reflect a sense of urgency in the unionist camp in the U.K. while creating panic among British party leaders as they are all in favor of defending "the family of nations." British Prime Minister David Cameron, in an article published in the British Daily Mail newspaper, called on Scots to vote No. "The United Kingdom is a precious and special country," Cameron wrote, "so let no one in Scotland be in any doubt: we desperately want you to stay; we do not want this family of nations to be ripped apart. If the U.K. breaks apart, it breaks apart forever. So the choice for you is clear: a leap into the dark with a Yes vote, or a brighter future for Scotland by voting No. You can have the best of both worlds in the U.K.," he claimed.

The British government has long agreed that Scotland should hold an independence referendum as they had little concern that it would result in a substantial Yes vote. However, compared to previous information, recent data shows the pro-independence camp rates have gained significant ground, nearing the unionist camp. "The message of this extraordinary, last minute reaction is that the Westminster elite are in a state of absolute panic as the ground in Scotland shifts under their feet," First Minister Alex Salmond, the leader of the Scottish National Party (SNP) said. "The No campaign think that they are losing this campaign - and these hugely distrusted Westminster leaders trooping up to Scotland is only going to boost that process," he said.

Apart from Cameron, Labor party leader Ed Miliband and Deputy Prime Minister Nick Clegg are also campaigning in Scotland. The reason why British leaders desperately want Scotland to stay part of the U.K. is a highly controversial matter. North Sea oil and gas resources remain central to the debate of the referendum and a determining factor for an independent Scotland's future. "Assuming a geographical allocation of North Sea oil and gas production, the Scottish economy would rank among the top 50 in the world by the size of GDP and would be relatively wealthy, richer than the rest of the U.K., and in the top 20 countries globally in terms of GDP per head," the Financial Times stated in February 2014. While the unionist No camp warns Scotland of possible budget shortfalls, the Yes campaign wants to end the oil tax regime with full control over its energy policy to end cuts imposed by London. Therefore, economic priorities could likely exceed nationalist sentiments in the independence referendum.
The fate of the pound is also of crucial importance in the referendum debate with the SNP favoring keeping the pound as the national currency. However, unionist parties in London, with regard to the Bank of England, reject the currency union with Scotland in the event the referendum passes.

On the path to independence, the first Scottish parliament was formed in July 1999.If there is a majority Yes vote, Scotland will become an independent country and the Scottish government would acquire its new independent status in March 2016.