Ukraine on path to decentralization 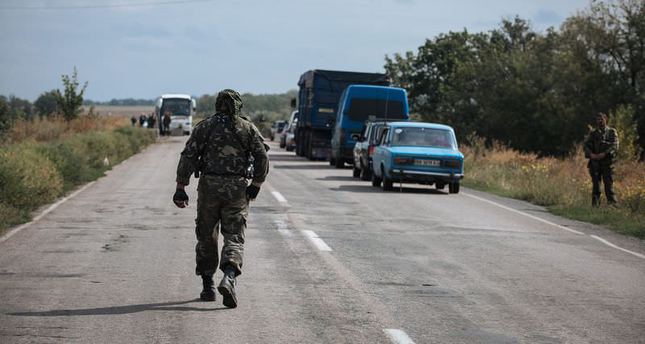 by Daily Sabah Sep 10, 2014 12:00 am
As Moscow has remained committed to the Ukraine peace process since the ceasefire agreement took effect on Sept. 5, Ukraine President Petro Poroshenko announced that he would submit a bill to parliament to grant special status to some areas of eastern Ukraine where pro-Russian separatists have been waging an armed rebellion against Ukrainian government forces. The granting of special status to eastern cities would be a blow to the Ukrainian government's centralized power.

The self-proclaimed people's republics in the eastern Donetsk and Luhansk regions have been seeking independence since they declared their autonomy in May, but the Ukrainian government has ruled out granting independence to the mainly Russianspeaking region; however, greater autonomy for rebel-held areas has been on Kiev's agenda. Poroshenko rejected any possible federalization or secession of Ukrainian land, as the Minsk accords on the status of eastern Ukraine promises only granting "special status."In response to Ukraine, Donetsk rebel leader Alexander Zakharchenko insisted on receiving much bigger territories saying, "The Donetsk People's Republic is the whole of the Donetsk region, and the Luhansk People's Republic is the whole of the Luhansk region," the Deutsche-Presse Agentur (DPA) news agency reported.

The third point of the 12-point protocol agreement states: "Conduct decentralization of power, including through approval of the Law of Ukraine 'On temporary order of local self-government in certain districts of Donetsk and Luhansk regions'," in order to grant special status to the local self-governments in some parts of the east of the country.

No additional detail has been provided to specify what the special status should be during the Minsk peace talks. An "inclusive national dialogue" is of crucial importance for maintaining joint steps toward an enduring peace plan in the war-torn region. The Trilateral Contact Group composed of representatives from Ukraine, Russian and the Organization for Security and Cooperation in Europe (OSCE), reached an agreement during the peace talks in Minsk, Belarus, held on Sept. 5.

Since the ceasefire took effect, it appears that the proposed peace plan has been holding despite reported violations on the outskirts of the port city of Mariupol and in the Donestsk region. Since the truce began, five Ukrainian soldiers have been killed and 33 injured, the National Security and Defense Council said Tuesday, DPA news agency reported. However, Ukrainian military spokesman Andriy Lysenko said, "This is the first relatively quiet day in eastern Ukraine," as quoted by the Interfax Ukraine news agency.The report also shows that almost 700 Ukrainian prisoners have been released so far in eastern Ukraine under the Minsk accords, signaling a significant easing of hostilities between pro-Russian separatists and Ukrainian armed forces.

Moscow is stressing the need "of maintaining a steady ceasefire in the southeast of Ukraine," reflecting an apparent improvement in Russia-Ukraine relations. However, after the EU's new economic sanctions against Russia over its involvement and support of separatist rebels, a law was signed to impose economic sanctions against Russian companies and individuals suspected of financing pro-Russian separatists battling Ukrainian forces in eastern Ukraine. Russia has denied all charges of sending troops and weapons across the border to support the rebel groups.
Since hostilities erupted in eastern Ukraine, more than 2,200 people have been killed during heavy clashes between the armed groups. According to the U.N., the death toll has sharply increased, as at least 36 people have been reported killed daily.