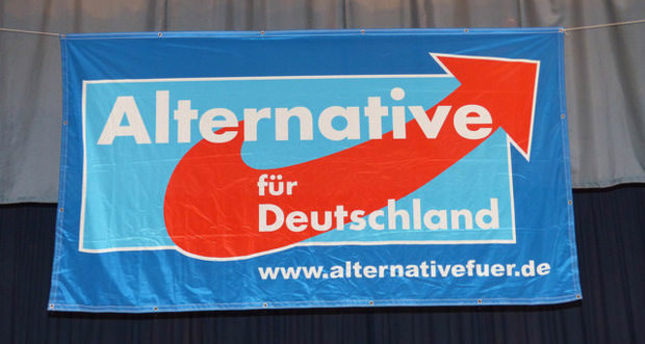 by Daily Sabah Sep 13, 2014 12:00 am
The Euroskeptic party "Alternative for Germany" could enter two more regional parliaments in the upcoming regional elections on Sunday after its success in Saxony, polls say. The one year old party won popularity amongst rightwing voters of the leading CDU party and xenophobic voters of the extremeright NPD party with its campaign to end EU bailouts, exit the eurozone and to increase the restrictions on refugees In two eastern states of Germany, Thuringia and Brandenburg, there will be elections on Sunday.

According to recent polls the Euroskeptic party AfD is expected to score around 7 to 9 percent in both states, which means it guarantees entering two parliaments. In an election in Saxony on Aug. 31, the Euroskeptic party entered its first German regional parliament. Winning almost 10 percent of votes it kicked the extreme right NPD party out of parliament and won over 35,000 voters from the CDU, which had the worst result after German re-unification in 1990.

Although in both states CDU's share of the vote is projected to rise by about 5 percentage points compared to previous elections, forming a coalition of competing parties against the CDU is possible because it falls short of a majority. The CDU ignored the growth of the AfD until the last elections and now they have to change their attitude and deal with problems which the AfD are using as party propaganda. "The AfD is a problem for all parties," Merkel told public broadcaster RBB this week. She said the popularity of AfD is a reminder that "we must address the problems that concern the people. They worry about crime and the rising number of asylum seekers.

We must not only address these issues but also find solutions. Then we'll have a good chance of winning back those voters who are perhaps dissatisfied," she said. However, any coalition formulas with the AfD in regional parliaments have been excluded by CDU officials.

In the eastern part of Brandenburg, which is on the German-Polish border, crimes of theft by Polish and Russian foreigners have increased. The AfD has been using this "border crime" issue as a platform for its election campaign in Brandenburg by promising the reintroduction of border controls, which are against the Schengen Agreement of the EU. The ideal outcome for Merkel would be to secure coalitions in both states between her own CDU and its coalition partner at the federal level the Social Democrats (SPD).

The bad outcome for Merkel would be coalitions among her opponents. The SPD could further its 24 year old control over Brandenburg if it continues the existing coalition with the far-left party Die Linke, which also opposes eurozone bailouts and is currently polling above 20 percent. It is unlikely, but if the SDP also forms a coalition with the Linke and the Greens in Thuringia, the CDU will lose its authority there. Both states are in former communist East Germany, which has been battered by years of wrenching economic change and where old sympathies with the left are still present with many people.
Last Update: Sep 14, 2014 12:04 pm
RELATED TOPICS