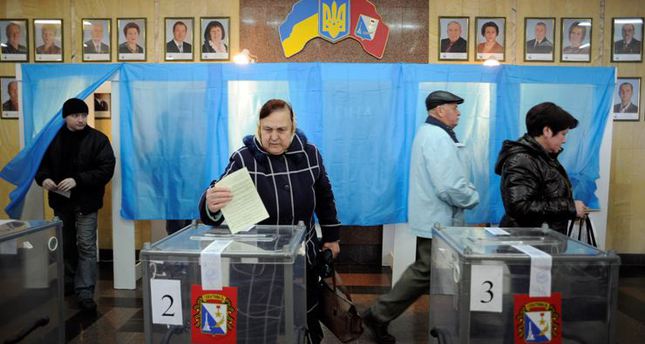 by Daily Sabah Sep 16, 2014 12:00 am
Six months after the Russian annexation of the Black Sea peninsula from Ukraine, Crimea went to the polls to vote in the Russian local and regional election that took place on Sunday. Despite Ukraine calling the elections in Crimea as illegal, the Russian election was held amid reports of violations and repression of opponents of the ruling pro-Putin United Russia party. Increasing pressure on ethnic Crimean Tatars, a Muslim ethnic minority, who are facing raids from ethnic Russians, led to a growing boycott of the elections. "There are no opposition parties. All the parties here are pro-Kremlin, pro-Putin. All of them support his policy, all of them love him,"

Nariman Dzhelyalov, a local politician who represents Crimean Tatars told Reuters news agency. How the elections took place is a crucial matter, as many violations have been reported where the regional elections took place. As many opponents of Putin's Russia have been repressed and forced to sign for membership in the ruling party, the election apparently was considered as "unfair and undemocratic." In Sunday's election, 30 regional governors, 14 regional parliaments and thousands of municipalities were elected, including Moscow's City regional parliament (Duma) and the governor of St. Petersburg. More than 75 million people were reported to have registered to vote. The Russian authorities put the turnout in Crimea at 45 percent, and the ruling United Russia party is projected to win 70 percent of the votes due to Western sanctions on Russia that led many Russians to rally around President Vladimir Putin.
Last Update: Sep 16, 2014 3:59 pm
RELATED TOPICS