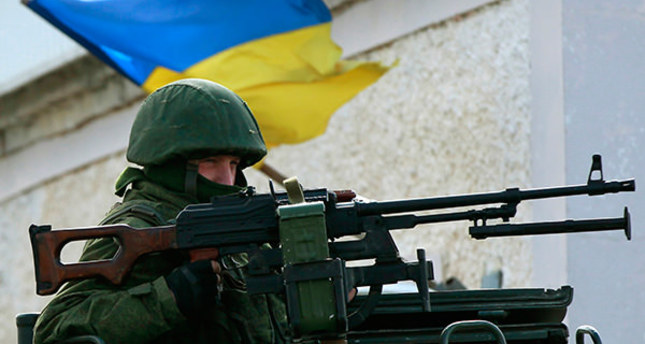 by Daily Sabah Sep 16, 2014 12:00 am
As clashes continue to incessantly violate the precarious cease-fire in eastern Ukraine, a joint military exercise dubbed Rapid Trident 14 between Ukraine and NATO allies was set to start Monday to strengthen the hand of Ukrainian forces in their battle with Russian-back separatists groups. During the latest 2014 NATO summit that took place in Wales on Sept. 4-5, after Ukrainian President Petro Poroshenko's meeting with world leaders and military advisors, it was agreed that weapons would be sent directly to the Ukrainian government. Yet, no official approval has been given by NATO countries.

"I met the defense ministers of the world's leading countries who could help us behind closed doors. They heard us. They have started providing weapons," Ukrainian Defense Minister Valery Galetei said in an interview with Ukraine's Channel 5 TV on Sunday.
Galetei had reportedly been in Wales to attend the NATO summit together with President Poroshenko.

According to reports from western Ukraine close to the border with Poland, the exercise began with some 1,300 troops from 12 NATO members, including Germany, the U.K., Poland, Lithuania and Canada, as well as non-NATO members Azerbaijan, Georgia and Moldova, Deutsch Presse-Agentur news agency reported.

The arms supply deal, other than sending military assistance, has not yet been confirmed by the U.S. and others involved in the joint exercise.
While NATO prepares to strengthen its position in the Ukrainian crisis in the face of Russian threats, the cease-fire agreement is on volatile ground and threatening to collapse.

Heavy fighting between government forces and pro-Russian rebels erupted in the rebelheld eastern cities of Donetsk and Luhansk, jeopardizing the peace plan that was agreed to in Minsk on Sept. 5 as proposed by President Poroshenko. Whereas no hostilities were reported on Monday, unease still remains in the east of the country.

The tension between Ukraine and Russia over the crisis in eastern Ukraine has not lessened, as Arseniy Yatsenyuk, the Ukrainian prime minister, accused Russia of toppling the world order and rebuilding the Soviet Union.

Rejecting the peace plan, he said that any bilateral agreements would harm Ukraine, while calling on the U.S. and the EU to mediate the peace process over the ongoing crisis.