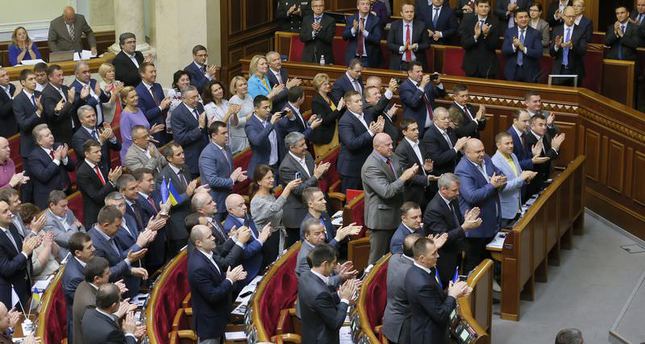 by AA Sep 16, 2014 12:00 am
The Verkhovna Rada - Ukraine's Parliament - ratified an association agreement with the European Union on Tuesday that was signed back in March and June.

The Agreement, which brings about a gradual strengthening of political and economic ties between the EU and Ukraine, was simultaneously approved by the European Parliament in Strasbourg.

Following the ratification, Ukraine's President Petro Poroshenko said that integration with the EU had become a national vision of his country.

The political section of the Agreement was signed on March 21 on the sidelines of an EU summit in Brussels which coincidentally was the same day Russia formally annexed the breakaway region of Crimea.

Ukraine witnessed a massive wave of anti-government protests after former President Viktor Yanukovych refrained from signing the Agreement in November last year, in favor of closer ties with Russia.

The free-trade agreement, which is different from all other agreements with non-member countries with 15 chapters, 14 attachments and three protocols, is expected to make a significant contribution to the Ukrainian economy.