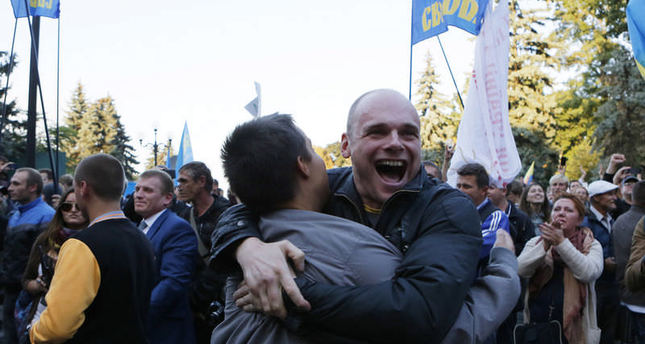 The Ukrainian parliament passed legislation to grant broader autonomy for a three-year period to the rebellious east. Yet, the move did not meet the expectations of rebels who seek full independence

A new law granting self-rule to the rebel-held eastern region was approved by the Ukrainian parliament, as part of a peace deal aimed at ending the month-long separatist fighting. The law grants self-rule and amnesty to pro-Russian rebels. As the granting of more power – and thus broader autonomy to the local administrations of Donetsk and Luhansk, known as the Donbass region – has put Ukraine on the path of a decentralization process, Ukrainian President Petro Poroshenko called the move a guarantor of Ukraine's "sovereignty, territorial integrity and independence." Greater autonomy for the rebellious east is seen as an important step to halt months of conflict, thereby bringing peace and stability to the country. Yet, the self-proclaimed people's republics in the eastern Donetsk and Luhansk regions have been seeking full independence backed by Russia since they declared their autonomy in May, but the Ukrainian government ruled out granting independence to the mainly Russian-speaking region.

Considering the self-rule law, the United States described the move as "a sign of Ukraine fulfilling its promises to its people and taking steps to address concerns, but doing so in a way that is best for all of Ukraine" and an important step for "de-escalating the conflict and moving forward."

"We understand the new law allows for the use of Russian as an official language [in state institutions], funds new development projects in Luhansk and Donetsk and gives the regions the right to form their own police forces. It also grants limited amnesty to those who participated in the conflict. […] The Ukrainians have done what they pledged to do; they've lived up to what they said they would do. We haven't seen the same on the Russian side, and that's what needs to happen," said U.S. State Department deputy spokesperson Marie Harf in a daily press briefing on Sept. 16.

In line with the Minsk accords of Sept. 5 signed between the Trilateral Contact Group composed of representatives from Ukraine, Russian and the Organization for Security and Cooperation in Europe (OSCE), the legislation also allows the strengthening of relations with Russia.

In addition, the Ukrainian parliament ratified an association agreement in an effort to build deeper economic and political ties with the European Union. The first move to strengthen ties with the EU sparked a political crisis that led to the overthrow of the Ukrainian president and Russia's annexation of Crimea and a violent conflict with pro-Russian separatists that has killed more than 3,000 people.

Since the cease-fire took effect, it appears that the proposed peace plan has been holding despite reported violations and sporadic fighting between the two sides on the outskirts of the port city of Mariupol and in the Donetsk region.