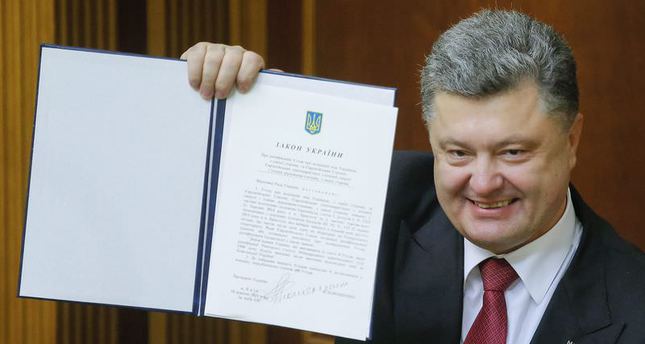 by AA Sep 18, 2014 12:00 am
In a statement released on Thursday, the foreign ministry said: "We are pleased with the simultaneous ratification of the association agreement by Ukraine and EU parliaments on September 16."

"Turkey strongly supports Ukraine's reform process and this country's preference towards developing relations with EU institutions at the rate and depth it desires."

The agreement, which brings about a gradual strengthening of political and economic ties between the EU and Ukraine, was simultaneously approved by the Verkhovna Rada and the European Parliament on Tuesday.

Following ratification, Ukraine's President Petro Poroshenko said integration with the EU had become a national vision of his country.

At the Rada, 355 out of 381 voted in favor of the agreement. In Strasbourg, 535 members voted yes while 127 voted against the ratification and 26 abstained.

The political section of the agreement was signed on March 21 on the same day Russia formally annexed the breakaway region of Crimea.

The free-trade agreement, which is different from all other agreements with non-member countries with 15 chapters, 14 attachments and three protocols, is expected to make a significant contribution to the Ukrainian economy.