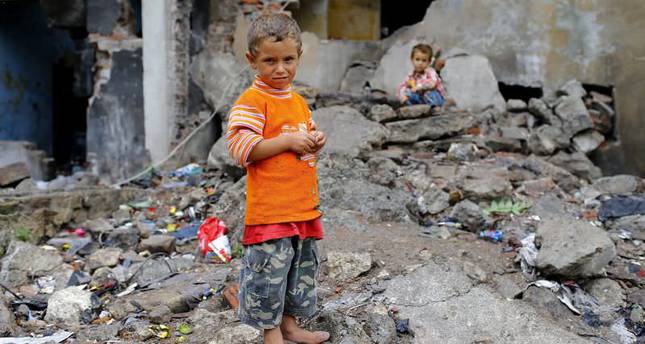 by Daily Sabah Sep 19, 2014 12:00 am
Brussels-based Human Rights Watch (HRW) released a report saying that Bulgarian police have been forcing Syrian asylum seekers to go back to Turkey and have beaten some of them as well. HRW documented three separate incidents of summary returns from Bulgaria to Turkey involving at least 43 people, all Syrians. "Beating people who may be seeking asylum and then forcing them back across the border is plain wrong and illegal," Lydia Gall, a Balkans and Eastern Europe researcher at HRW, said. "The EU should press Sofia to keep its borders open to Syrians and other asylum seekers and to put an end to these abusive practices," Gall added. On Aug. 28, Bulgarian border police caught a group of about 22 Syrians in a forest after they crossed the Bulgarian border, a member of the group told HRW by phone from Turkey on Sept. 11.

Sharif, his wife and four children - the youngest of which is 2-years-old - were all part of the group. He said he knew the border police were Bulgarian because their language sounded like Russian. The police searched the men and took their mobile phones, money and water. Sharif said that he saw them beat the younger men, though he personally was not beaten. He said that the police put everyone in police cars and drove for about an hour to the Turkish border where the police said to them, "Go, go." Sharif, like others interviewed, is not identified by his real name for his protection. Bulgaria is known for its reluctance in accepting Syrian refugees as the country built hundreds of kilometers of fences near Turkish border. Bulgarian officials did not make any immediate comment on the incidents.
Last Update: Sep 19, 2014 9:28 am
RELATED TOPICS