Scotland votes 'No' to independence amid growing fears of secession 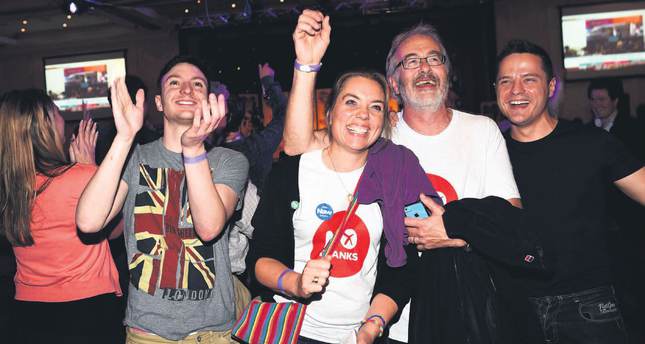 Scotland says 'No' to independence from the United Kingdom, choosing to maintain a centuries-old union which could set an example for other secessionist movements around world

Millions in Scotland on Thursday took part in the independence referendum, deciding to remain part of the U.K. The historic referendum saw Scots preserve the 307-year-old union of the U.K. with England, Wales and North Ireland. Scotland's pro-independence campaign, which led various secessionist movements around the world, concluded with a 55 percent majority of people still in favor of being part of the union. The result of the referendum also eased fears of a separatist domino effect across Europe and elsewhere. The polls show that after 32 Scottish councils were declared, Scots rejected independence by a margin of around 55.3 percent for the "No" vote to 44.7 percent for the "Yes" vote.

The 10-point victory margin was wider than most opinion polls were predicting. Scottish independence had created fears of increasing separatism across Europe. Seen as "cataclysmic" for Europe, a Yes vote for independence would have paved the way to an "ungovernable" European continent deteriorated by nascent small independent states. "If it had happened in Scotland, I think it would have been a political landslide on the scale of the break-up of the Soviet Union," said Krel De Gucht, a Belgian European commissioner told Reuters news agency. "It would have been cataclysmic for Europe. That was what I feared. A Europe driven by self-determination of peoples ... is ungovernable because you'd have dozens of entities but areas of policy for which you need unanimity or a very large majority," he added.

The first secession debate sparked by the Scottish referendum was about the Catalan push for independence. The Catalan independence campaign to break away from Spain has gained significant ground as hundreds of thousands of Catalans took to the streets of Barcelona on Thursday to demand the right to vote on a split from Spain. Their hopes for independence were fuelled immediately after Scotland's pro-independence camp narrowed the gap in the polls, raising hopes for seceding from the U.K. Despite Madrid's refusal, Spain's wealthy Catalonia region has set the date for holding a referendum on independence on Nov. 9 over whether to separate. After Scotland's vote, tension was eased in Spain facing down a bid by Catalonia for its own self-rule vote. Spanish Prime Minister Mariano Rajoy said he was "very happy that Scotland is staying with us," stressing that it was a positive sign for a more integrated and powerful EU.

Apart from Catalans and Scots, with the Scots having led the charge, there appears to be a pattern emerging in Europe as many active separatist movements begin to rise. The demands from Flemings to break away from Belgium to form their own state would provide a significant example for ongoing secessionist debates.

Meanwhile, the "No" vote to independence was welcomed by British Prime Minister David Cameron from his London offices in a televised speech at around 0600 GMT. He noted that Britain would remain a united country following Scotland's referendum rejecting independence.

Amid international concern over defense and security issues, NATO Secretary General Anders Fogh Rasmussen also welcomed the result. "The U.K. is a founding member of NATO, and I am confident that the U.K. will continue to play a leading role to keep our Alliance strong," Rasmussen said in a statement on Friday, stressing the importance of a united country. Amid the massive "Better-together" campaign, a sense of urgency in the unionist camp in the U.K. created a panic among British leaders, all of whom were in favor of defending the "family of nations."

As voters in Scotland rejected independence, British leaders of the three largest parties promised to give more autonomy to Scotland. Prime Minister Cameron stated that greater independence from the central government would be given not only to Scotland, but also to Wales and Northern Ireland.
Last Update: Sep 21, 2014 4:10 pm
RELATED TOPICS