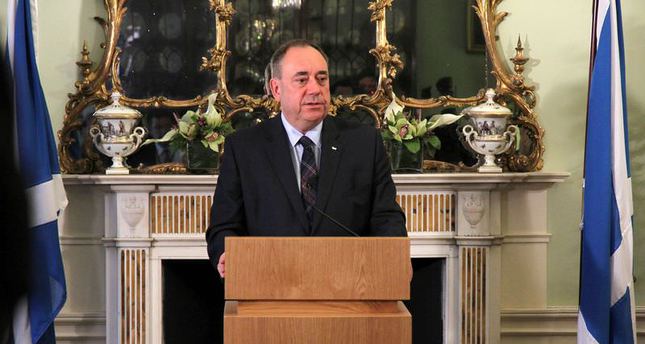 by AA Sep 20, 2014 12:00 am
Scotland's First Minister Alex Salmond has announced his resignation following the failure to win independence from the United Kingdom in the Scottish referendum.

Speaking to journalists at his official residence, Bute House in Edinburgh on Friday, he said, "For me as leader, my time is nearly over, but for Scotland the campaign continues and the dream shall never die."

He said he would step down as leader of the Scottish National Party and First Minister at the party conference set to take place in November.

Early on Friday morning results showed 2,001,926 voters had chosen to remain British, with 1,617,989 opted for independence.
Salmond said: "I am immensely proud of the campaign that Yes Scotland fought and particularly of the 1.6 millon voters who rallied to that cause. As I said often during the referendum campaign, this is not about me or the SNP, it is much more important than that."

Salmond has led the Scottish National Party for 20 years.

British political leaders had scrambled to keep the country in the UK just two days before the polls amid fears of a No vote, pledging to devolve new powers to the Scottish government.

He told journalists: "We now have the opportunity to hold Westminster's feet to the fire on the 'vow' that they have made to devolve further meaningful power to Scotland."

However, Salmond said that he had spoken to Prime Minister David Cameron and "although he reiterated his intention to proceed as he has outlined, he would not commit to a second reading by 27th March on a Scotland Bill".

David Cameron had promised a first reading by December, however, former Prime Minister Gordon Brown had promised a timetable for further devolution powers, something all three party leaders agreed to.

Salmond said: "The prime minister says such a vote would be meaningless. I suspect he cannot guarantee the support of his party."

The next first minister would need the support of the Scottish parliament, he said.

"The position is this; we lost the referendum vote, but can still carry the political initiative. More importantly, Scotland can still emerge as the real winner," Salmond said.

Scotland will remain within the United Kingdom after the pro-independence campaign was defeated at the polls in one of the most important votes in modern British history.

Scotland has decided "at this stage" not to become an independent country, he added.

President Barack Obama on Friday welcomed the result of the referendum on independence in Scotland and congratulated the Scots for their exercise in democracy.

"Through debate, discussion, and passionate yet peaceful deliberations, they reminded the world of Scotland's enormous contributions to the UK and the world," Obama said in a statement.

President Obama also noted that the U.S. has no closer ally than the U.K., adding that he was looking forward to continuing the strong and special relationship between the two states and addressing the challenges facing the world.

On previous occasions Obama indicated that he would like to see the UK remain united and as recently as Monday he tweeted, "The UK is an extraordinary partner for America and a force for good in an unstable world. I hope it remains strong, robust and united."

With a population of 4.3 million, Thursday's turnout stood at 84 percent, a record high in Scotland.

The referendum had threatened a union that has lasted for 307 years.