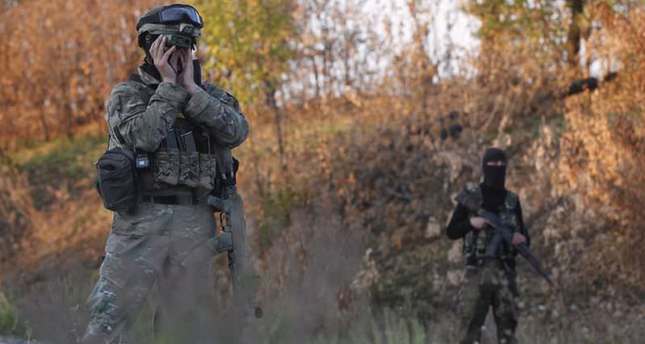 by Sep 21, 2014 12:00 am
Heavy gunfire erupted around the eastern Ukrainian rebel stronghold of Donetsk on Sunday, just hours after NATO's top commander General Philip Breedlove said Saturday that continued clashes had shown the two-week-old agreement to be a ceasefire "in name only" and accused Russia of keeping soldiers on Ukrainian soil to bolster the insurgents. The truce was "still there in name, but what is happening on the ground is quite a different story," he said on the sidelines of a NATO meeting symbolically convened in the ex-Soviet satellite state of Lithuania.

The violence flared on the day Ukrainian forces and pro-Kremlin insurgents were required to pull back from the frontline and create a buffer zone under a new peace plan hammered out in the Belarussian capital Minsk on Saturday. AFP correspondents heard explosions and shelling around Donetsk airport, a key battleground in the five-month separatist uprising against Kiev's rule. It was not known if there had been any movement of fighters away from a proposed 30-kilometer (20-mile) demilitarized zone on the frontline that splits the rebel-controlled east from the rest of the former Soviet state.

The nine-point Minsk plan is meant to reinforce a truce forged on Sept. 5 in a bid to stem fighting that has claimed nearly 3,000 lives and threatened Ukraine's very survival. The Minsk memorandum signed by the warring parties and endorsed by both Moscow's Kiev ambassador and an OSCE envoy, also requires the withdrawal of all "foreign armed groups" and mercenaries from the conflict zone.

Russia denies having any forces in Ukraine. It says a number of its troops captured by Kiev's forces must have accidently strayed across the border. However, NATO's top commander insisted that the Russian forces "are still inside Ukraine."

In Moscow, thousands of Russians are expected to protest against the Kremlin's involvement in the Ukraine conflict, the first major anti-war rally since fighting flared in the east in April.

Swiss president and OSCE chief Didier Burkhalter hailed the Minsk deal as "a significant step towards making the ceasefire sustainable and an important contribution in the efforts to peacefully settle the crisis." But, the pact only came together after all sides agreed to leave the most divisive political issues over the status of the rebel-held areas in Ukraine's rustbelt for future negotiation. In a major olive branch to the rebels last week, Kiev offered the eastern regions temporary self-rule and adopted legislation granting amnesty to fighters on both sides.

Meanwhile, the third Russian aid truck convoy was reportedly sent to the Russian border. Rebel representatives in the city of nearly one million people also said Saturday they had received a huge Russian humanitarian convoy, a type of shipment Kiev believes Moscow may be using to secretly supply the rebels with arms. A Ukrainian security spokesman said Moscow had blatantly "violated international law and our sovereignty" because it never gave Ukrainian customs officials a chance to inspect the cargo.