What has been happening in the UK and Europe since Scottish referendum? 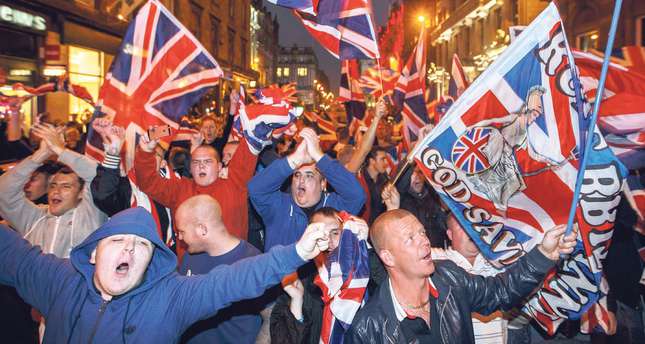 Following the declaration of the referendum result, the impact of the 'No' vote to independence will play a crucial role to understand the effects of the referendum in the U.K. and many other countries across Europe

Scotland has voted to remain part of the U.K. and preserve its 307-yearold union with England after the referendum on Sept. 18. The "No Campaign" against independence won with 55.3 percent of the votes, still one question lingers: Why did the Scots reject their opportunity for independence even though the "Yes Campaign" had worked harder. This question may have three answers.

First, United Kingdom Prime Minister David Cameron, Deputy Prime Minister Nick Clegg and Labor Party leader Ed Miliband all pledged that the Scottish parliament will get more powers in the event of a "no" vote, with the three Westminster parties making a formal joint declaration in which they guaranteed to "further strengthen the powers of the Scottish parliament." This promise was made very close to the time of the referendum.

Second, there are about 750,000 people who were born in Scotland who live south of the border. This number is more than the population of Edinburgh or Glasgow. They had no right to vote in the independence referendum. On the other hand, approximately 480,000 people, who were born in other parts of the U.K., now reside in Scotland. They also voted in the historic referendum and the majority of them rejected independence for Scotland.

Lastly, the elderly preferred to stay in the U.K., whereas the younger population supported Scottish independence. One could argue the elderly were largely influenced by U.K. propaganda after World War II.

So, now what will happen in Scotland and the other parts of the United Kingdom?

Alex Salmond, the first minister of Scotland, resigned due to the referendum result on Friday with a warning that millions of Scots would be "incandescent" if Westminster party leaders broke a promise to fast track devolution.

After the announcement of the referendum result, David Cameron declared that the Scottish referendum result "kept our country of four nations together," but it was time for a new constitutional settlement. This is not only for Scotland but also for the rest of the United Kingdom.

Cameron also underlined that the Scottish parliament would have new powers over taxation, spending and some aspects of social policy with the specifics to be arranged by an independent commission. He said he hoped to create consensus with other parties over the draft legislation by January.

But there are very important differences between the Conservative Party, the Liberal Democrats and the Labor Party concerning sharing power with the Scottish parliament.

The conservatives want to allow Scotland to control all income tax rates and bands. The Scottish parliament would also have responsibility for 40 percent of the money it spent.

The Labor Party suggests giving the Scottish parliament the power to vary income tax by 15 pence in the pound, but not the power to cut the top tax rate on its own.

Also the Scottish government is expected to struggle to increase the power that is needed to gain control of income tax, corporate tax and extensive control over social policy. In addition, many in Wales and Northern Ireland also want more power too.

Catalonia represents one fifth of Spain's economy and has its own parliament, police force and controls its own education and health system. They are also going to hold an independence referendum on Nov. 9, which the Spanish government strongly opposes, claiming that it is unconstitutional.
A few days before the Scottish independence referendum, members of the Flemish nationalist group demonstrated for and called for the independence of the Flemish region of Belgium, near Brussels.

Later, it was also announced that Venice wants to leave Italy. In March this year, according to an online referendum result, nine out of ten people in Venice voted for independence.