Not possible to win with weapons only, says Ukraine's Poroshenko 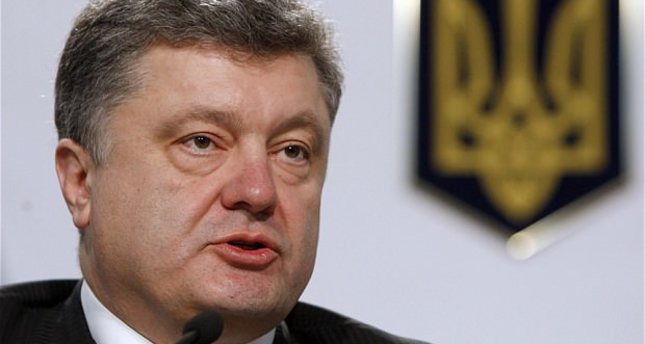 Ukraine reported more deaths among its troops and separatists on Sunday despite a cease-fire, but President Petro Poroshenko defended his peace plan, saying a military solution was no option and Western support could have been at risk. The Kiev military accused separatists and Russian troops of violating the Sept. 5 cease-fire in eastern Ukraine by continuing to shoot at government forces. Kiev would not go ahead with setting up a proposed buffer-zone until the violations stopped. "In the last 24 hours we have lost two Ukrainian soldiers, eight have been wounded," military spokesman Andriy Lysenko told reporters on Sunday. Lysenko said separatists had carried out a further attack on the governmentheld international airport of Donetsk, the east's main industrial hub. The rebels hold the city of Donetsk.

He said 40 separatist fighters had been killed in "defensive" fire by Ukrainian forces. There was no independent confirmation of this figure. Poroshenko declared the ceasefire after considerable battlefield losses against the separatists which Kiev ascribed to direct military intervention by Russian troops.

Moscow denies its forces are involved in the conflict, in which more than 3,000 people have been killed, despite what Kiev and Western governments say is undeniable proof. The Ukrainian leader, in a televised question and answer session with a group of Ukrainian journalists after returning from the United States, acknowledged that Ukrainian troops were still being killed but he said the death rate was 'ten times fewer' than before. "It is not possible to win purely by military means. The more Ukrainian army battalions or brigades are brought up, the more troops there are from the Russian Federation," he said, adding that 60-65 percent of Ukraine's military equipment on the front-line had been destroyed. And Ukraine would not win without international support, he added, suggesting he had been under pressure from the U.S. and other Western governments to declare a ceasefire and work for a political compromise.

Poroshenko has come under attack from within the pro-Western establishment at home for laws, bull-dozed through parliament, which grant 'special status' to independence- minded separatists who have declared 'people's republics' in the east and would allow them to enjoy limited self-rule for a three-year period. The plan, which would also grant freedom from prosecution to separatists who have been fighting government forces, has also been met with derision by rebels who say they do not want to be part of Ukraine. Justifying his peace plan, Poroshenko said it had allowed an exchange of prisoners and the return home of Ukrainian prisoners 'who had been undergoing torture.' And he later tweeted that 28 Ukrainian soldiers had been released on Sunday, bringing to a total of 63 returned home under a prisoner exchange in the past two days. A Reuters correspondent in Donetsk said that Sunday's exchange, in which the Ukrainian side also handed over 28 separatist fighters, took place about 20 km (13 miles) outside Donetsk with the sound of artillery firing from the airport in the background.

Poroshenko said priorities were to get all Russian troops, which have already been withdrawing, out of the country. "We'll monitor this. We'll say when the last Russian soldier has left," he said. The border with Russia had also to be closed. Poroshenko addressed the U.S. Congress and met President Barack Obama during a trip to Washington last Thursday which brought Ukraine $53 million in fresh aid, though no promise of lethal weaponry. The Ukrainian leader said on Sunday that though Ukraine had machine-guns, tanks, missile systems, rockets and artillery it expected to receive intelligence equipment, radar and observation systems "which will allow us to increase ten-fold the effectiveness of our weapons."

The Ukrainian military's more downbeat assessment of the situation echoed that of NATO's top military commander U.S. Air Force General Philip Breedlove, who said on Saturday that fighting was continuing in Ukraine and that the truce was a ceasefire 'in name only.' "The situation in Ukraine is not good right now," U.S. Air Force General Philip Breedlove told reporters in the Lithuanian capital of Vilnius following a meeting of chiefs of defense of NATO countries. "Basically, we have a ceasefire in name only." "The number of events, and the number of rounds fired and the artillery used across the past few days, matches some of the preceasefire levels. The ceasefire is still there in name, but what is happening on the ground is quite a different story." Ukraine's warring sides agreed on Friday to withdraw artillery and other heavy weapons to the outer limits of a 30 km (19 mile) buffer zone, building on the ceasefire. But the military spokesman, Lysenko, said work on establishing the buffer zone could not start while the ceasefire was being violated.