Over 180,000 Ukrainians seek refuge in Russia amid the continuing crisis 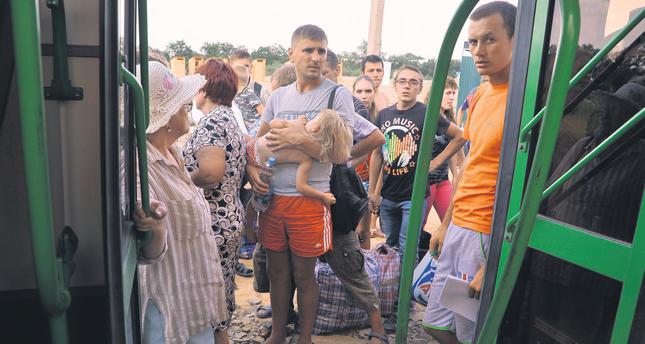 The fragile peace plan continues to hold in Ukraine's embattled east, thousands of Ukrainians have applied for refugee status in Russia due to increased humanitarian suffering

Due to long-standing violence in war-torn eastern Ukraine, a large number of Ukrainian citizens have sought refugee status to stay in Russia. At least 180,000 Ukrainians have fled from the worsening humanitarian crisis and registered with the Russian Federal Migration Service (FMS). The number is likely to rise unless a more comprehensive and permanent solution can be reached to halt the ongoing violence.

Russian authorities said that over 110,000 Ukrainians have already received such status. In addition, 90,000 people have sought a temporary residency permit. In total, more than 730,000 people have fled from the violence and crossed into Russia without needing to obtain a visa, according to Russian authorities. "Ukrainians want to leave the conflict area and stay in Russia forever. It makes sense.

Ukrainian migrants do not need serious adaptation and integration training because we have a common system of cultural and historical values and symmetric approaches toward education and professional qualification," said the head of the FMS, Konstantin Romodanovsky, according to the Russian Itar-Tass news agency. He also stressed that Ukrainians seeking refuge in Russia showed "demographic support for [Russia]. Over 250,000 people are practically ready to integrate into Russian society."

The Russian state program for voluntary resettlement of Ukrainians includes the distribution of newly arriving refugees on Russian territory. Oblasts including Crimea, Belgorod, Bryansk, Voronezh, Kursk, Leningrad, Moscow and Rostov and the cities of Moscow, St. Petersburg and Sevastopol are no longer providing shelter for newcomers.

Many refugees have been moved to other oblasts in Russia. Some of refugees were reportedly sent to non-Russian republics of the Russian Federation that are far away from Ukraine. According to Tatar-Bashkir Service reports, up to 5,000 refugees from eastern Ukraine were directed by Russian authorities and sent to Bashkortostan, a Turkic republic thousands of kilometers away from Ukraine.

After the Minsk cease-fire agreement was signed on Sept. 5, most refugees from Ukraine have reportedly returned to their country via Russia's southern Rostov Oblast. Yet the volatile cease-fire agreement has prompted fears that hostilities could resume as there is little hope that the agreement can bring continued peace to the east of the country. "Most [Ukrainians] expressed a low level of trust in both parties to the conflict being afraid that hostilities may resume soon," Paul Picard, the head of the Organization for Security and Cooperation in Europe (OSCE) mission in the Rostov Oblast, said at a news briefing. After the Minsk accords of Sept. 5 have been signed by the Trilateral Contact Group on Ukraine consisting of representatives from Russia, Ukraine, the OSCE as well as representatives from the self-proclaimed Donetsk People's Republic and Luhansk People's Republic, there has been an apparent ease in tensions in the conflict-torn east despite some reported shelling between local militiamen and pro-Russian rebels in Donetsk.

Regarding the implementation of the Minsk accords, pro-Russian rebels in Donetsk started withdrawing military hardware on Tuesday. "We are complying with the terms of the agreement and are withdrawing heavy artillery, unlike the Ukrainian side," Donetsk's self-styled defense minister Vladimir Kononov said. This move came after Kiev government forces had announced the preparation for the withdrawal of its heavy weaponry from frontline positions. The recent withdrawal from both sides came after the meeting of the Trilateral Contact Group on Ukraine on Sept. 20 adopted a memorandum outlining the details for the implementation of the peace plan.

Following the pro-Russian rebels declaration of independence in the self-proclaimed Donetsk People's Republic in April, instability has prevailed in eastern Ukraine. After declaring their independence, clashes have been increasing throughout the region where Ukrainian government forces have stepped up operations in an anti-terror operation. The conflict has come at the cost of an increasingly high death toll that has reached more than 3,000.
Last Update: Sep 24, 2014 9:22 am
RELATED TOPICS