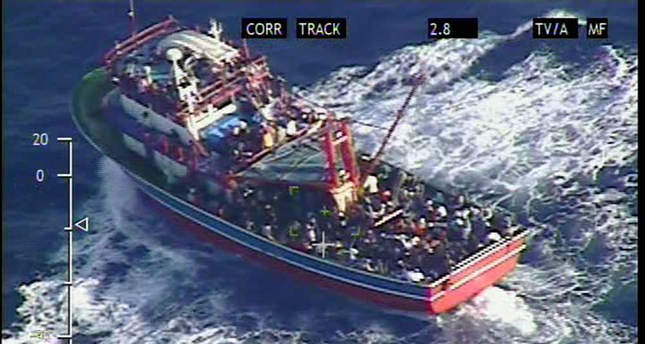 by Emre Diner Sep 28, 2014 12:00 am
A total of 345 people, thought to be refugees from Syria who may have paid more than $3,000 (TL 6,800) per person to escape the war-torn country, were safely ashore last night after a massive salvage operation of a fishing trawler that had gone adrift southwest of Greek Cyprus on Friday.

The rescued people – 293 adults and 52 children – were given shelter at a processing and receiving terminal specially set up at the Limassol harbor where they received medical attention and were set to be transported to an army barracks in Kokkinotrimithia, near south Nicosia.

The Salamis Filoxenia – the cruise liner that earlier in the day met with the trawler to pick up the distressed passengers – docked in Limassol around 8:30 p.m.

Other than a few children suffering from dehydration, all the distressed passengers were reported to be in good health.
The cruise ship came to the trawler's rescue after the vessel issued a radio distress signal in the morning. Authorities contacted the Salamis, which at the time was out at sea headed back to Limassol, to plot a new course and meet up with the trawler.

"It was quite a difficult operation," said Kikis Vasiliou, director of Salamis Cruises, owner of the cruise ship. "All the passengers are safe."

Vasiliou commended the captain and crew, adding that the goal was to save the people's lives. The rescue effort finished at around 2:30 p.m. No one was injured during the transfer to the cruise ship, the Greek Cypriot defense ministry said.

The ministry said the distress signal from the boat was received at 6:25 a.m. The vessel was located some 50 nautical miles (90 km) southwest of Paphos. Aboard the cruise ship was a camera crew from the state broadcaster CyBC who beamed back images of the rescue operation.