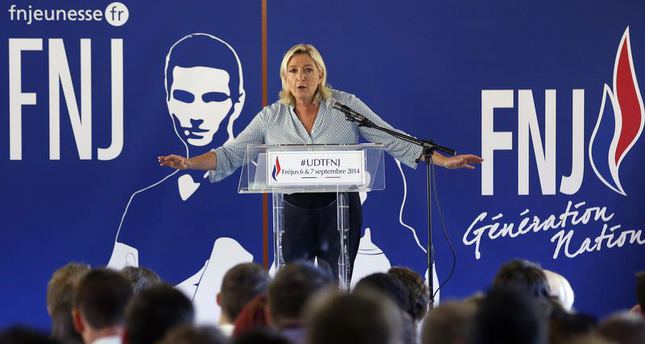 by Sep 29, 2014 12:00 am
The far-right National Front grab its first ever seats in France's upper house of parliament on Sunday, as President Francois Hollande's Socialist party lost its Senate majority.

The left still controls the lower house, which is the dominant legislative body in France, but Sunday's ballot underlined the unpopularity of the president and the continued rise of the anti-immigration, anti-euro National Front.

The party, led by Marine Le Pen, took two seats in the august Senate, following on from its surprise victory in European parliamentary elections in May and its strong showing in municipal elections in March.

"These results are beyond what we hoped for," said Le Pen. "Each day that passes, our ideas are increasingly being adopted by the French people... We have great potential."

Half of the Senate's 348 seats were up for grabs on Sunday, with only some 158,000 people, the vast majority local councillors, able to vote.

Early results showed that the main opposition party, the UMP, and the centre-right UDI party took at least 20 seats from the left, which had a Senate majority of just six heading into the election. Final results were due later on Sunday.

Hollande's popularity fell to a record low this month, with only 13 percent of those surveyed saying they were satisfied with the performance of president, who has struggled to revive the stagnant economy.

The National Front has successfully capitalised on growing discontent over unemployment and resentment over immigration, and hopes to score an upset in the 2017 presidential election.

"There is only one door left for us to push and it is that of the Elysee," said newly-elected National Front senator Stephane Ravier, referring to the French presidency.