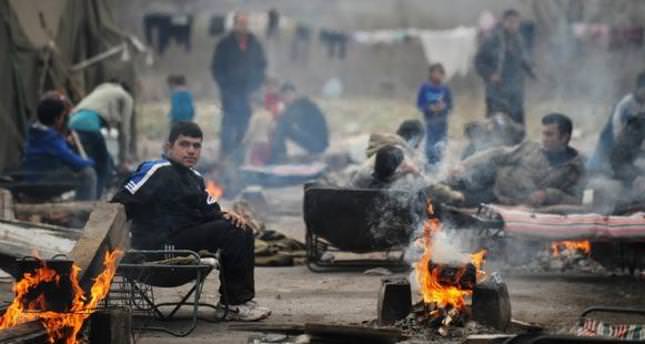 by Associated Press Sep 29, 2014 12:00 am
Surrounded by compatriots among a row of white canvas tents and prefabricated homes, Bahjat Molla sings mournfully of missing his Latakia home, of the aroma of freshly brewed coffee, of sitting with his mother. It is an impromptu performance for the 22-year old in front of some of the 345 Syrian refugees who started settling in Friday in this former army camp converted into way station for newly-arrived migrants. He doe not disappoint.

A day earlier, the refugees had survived a seaborne ordeal when their small, rickety fishing boat got into trouble a few days after setting sail from Latakia. Lashed by high waves, the boat issued a distress call some 50 nautical miles off Cyprus' southwestern coastal town of Paphos. They were picked up by a Cypriot cruise ship on its way back from an Aegean island cruise. "In Syria we don't have many choices, it's either death or death," Molla said through an interpreter. "Because we are either staying in Syria and facing death there, or taking the risk and leaving with the slim hope."

Molla said he fled alone, but like many others paid $6,000 for a spot on the boat in hopes of reaching family in Sweden after a promised landing in Italy. He said being of draft age, he didn't want to face his countrymen "with a weapon in my hand." Lawyer Corina Droushiotou with the NGO Future Worlds Center said refugees feel "trapped" in the camp they see as a prison, but officials are trying to explain that it's only a temporary arrangement. Unused to mass influxes of refugees from neighboring Syria just 200 kilometers away, Cypriot authorities did well to respond to the emergency, earning accolades. "We are extremely pleased with the performance of the Cypriot authorities," Damtew Dessalenge, Cyprus representative of the United Nations High Commission for Refugees told the Associated Press.

Malla said Cyprus may be an EU member, but it's "not quite able to offer us what other European states are offering us." The small island's economy is still struggling to come out recession after an international rescue deal last year saved it from bankruptcy.

Unyielding after hours of negotiations, Cypriot Justice Minister Ionas Nicolaou said police "gently" intervened to pressure the holdouts "without the use of violence."

Diala Rifae didn't see it that way. Although grateful to Cypriot authorities for the rescue, the 35-year-old Homs native was critical of what she said were heavy-handed tactics that resulted in police striking an old lady and "dragging people by force."

Even worse for Rifae was the conduct of human traffickers who deceived passengers by portraying what she said was a "very small, banged up boat" deluged with people as "a very safe boat." Rifae is seeking to travel to Germany with her son to join her husband and her other two sons, hoping that her husband will get her a lawyer to press her case.

Cypriot police have already detained the suspected 58-year-old captain of the boat, his teenage son as well as his first mate and boat mechanic.