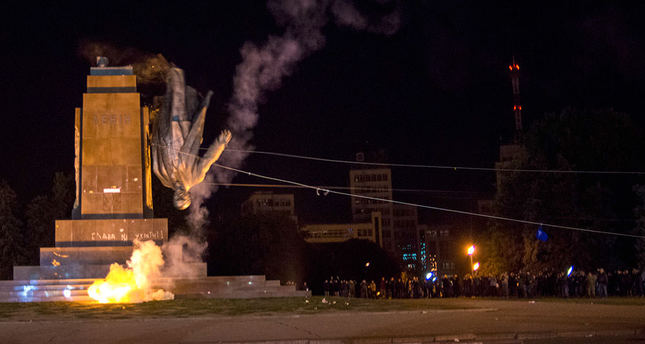 The protests against the Russian involvement in clashes in the Ukraine started on late Sunday.

The protesters reportedly commented that the statue resembles the Russian aggression and imperialism, and great famines and purges of the 1930's while Ukraine was a Soviet republic.

Kharkiv, also known with its Russian name Kharkov, is located close to the Russian border in Northeast Ukraine and inhabited mainly by a Russian speaking population. The city was perceived to become the center of separatist movement before the clashes in Donbass region, but with the recent Russian involvement, the sentiment among Kharkiv's population grew increasingly pro-Ukrainian.

Around 150 Soviet era monuments throughout Ukraine were destroyed since November 2013, when protests against pro-Russian president Viktor Yanukovych began.