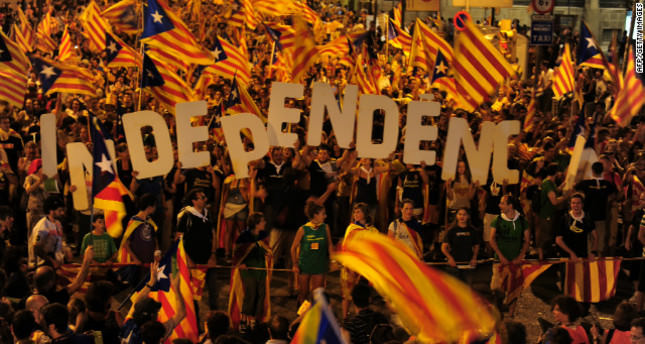 After Scotland’s independence referendum, Catalonia tries its chances to become an independent state despite legal roadblocks imposed by the Spanish government against independence votes

Spain's political agenda has been once again dominated by the question of whether the Catalonia independence referendum would go ahead on Nov. 9 as proposed by the president of the Generalitat of Cattalonia, Artur Mas i Gavarró. Despite Catalonia's insistence on an independence referendum, the Spanish government, which says such a move is unconstitutional, denied it quickly. Madrid challenged the call for a referendum through holding an emergency cabinet meeting headed by Spanish Prime Minister Mariano Rajoy on Monday in order to launch a constitutional appeal to block the referendum. Spain's center-right ruling People's Party (PP) took the case to the top Constitutional Court that is to decide whether the referendum can go ahead or be suspended until a final ruling is made on its legality. The referendum poses a greater challenge to the Spanish state, which considers the referendum unconstitutional due to the fact that the non-binding vote would violate Spain's 1978 constitution that only allows referenda that include all Spaniards. According to the Spanish constitution, Catalonia does not have the legal capacity to hold an independence referendum. "No government, nobody, is above the law because nobody is above the sovereign will of all the Spanish people," Spanish Deputy Prime Minister Soraya Sáenz de Santamaría said, Reuters reported.

In the wake of the long fight for self-rule, Spain's Catalonia region signed a decree on Saturday calling for an independence referendum. The regional leader approved it saying, "As all the nations in the world, Catalonia has the right to decide its political future. […] We believe that political issues must be resolved by negotiation and civilized attitudes. And we know that democracy is the most civilized way to resolve difficulties between nations," Mas, speaking at a solemn ceremony in the Catalan government's offices in Barcelona.

Polls indicate that a large majority of the Catalan population is in favor of an independence vote as many have been encouraged by the huge turnout for a similar vote on independence in Scotland. Their hopes for independence were fuelled immediately after Scotland's pro-independence camp narrowed the gap in polls. The National Day of Catalonia on Sept. 11 took the form of a massive pro-independence demonstration against the Madrid government refusing to discuss Catalonia's full independence from Spain.

Catalan votes on independence from Spain have been blocked several times in Spanish political history. Recalling the latest moves from the Madrid government, Spanish parliament in April 2014, voted to reject a request by the Catalan authorities a greater autonomy. After a long debate, all major parties voted against the referendum. A total of 229 Spanish parliamentarians voted against the motion, with 47 votes in favor. Rajoy called the referendum illegal while saying that Madrid would not give permission to Catalonia to hold a referendum.

Catalonia is Spain's most industrialized and economically productive region. With a population of 7.6 million, it has long enjoyed prosperity and well-being in Spain's northeast with its own language and culture as opposed to the rest of Spain suffering from economic challenges including high unemployment rates and a low average income. The economic crisis in Spain since 2008 has caused increasing tension between the two sides, leading to a greater surge in support for independence. Under painful economic conditions, about 2 million people suffering from harsh economic conditions had marched in Barcelona on the National Day of Catalonia in 2012, which led to grassroots pressure that forced Catalan nationalists to break away from the Spanish state. The Catalan government has blamed the central government for much of Spain's debt crisis. Even though Catalonia lacks natural resources, it is one of Spain's richest regions, which makes the average income higher than the state-wide average with 27,300 euros (TL 79,366; $34,674) per year.