No permanent truce reached in Ukraine’s east as clashes resume 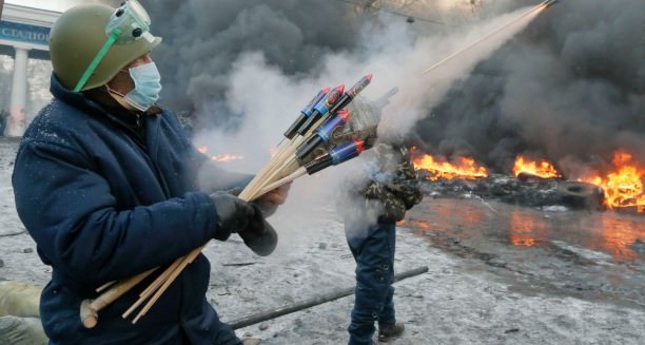 by Daily Sabah Oct 02, 2014 12:00 am
Fresh fighting at the strategically important Donetsk airport in the rebel-held city was reported on Tuesday night, resulting in at least 15 people killed during the heavy clashes. As the shelling centered on the airport, three civilians were reportedly killed. Seven Kiev soldiers and five pro-Russian separatists were dead. Since the cease-fire took effect on Sept. 5, both sides have been accusing each other of having violated the proposed peace plan that had been holding on volatile ground, as dozens of violations were reported in the eastern city of Donetsk.

The Trilateral Contact Group, which is composed of representatives from Ukraine, Russia and the Organization for Security and Cooperation in Europe (OSCE), reached an agreement during the peace talks in Minsk, Belarus, held on Sept. 5, known as the Minsk accords. It includes granting decentralized power to the local self-government in certain districts of Donetsk and Luhansk regions and allowing the eastern cities to strengthen relations with Russia. The Sept. 20 memorandum agreed to by pro-Russian separatist leaders and Kiev government representatives stipulated the withdrawal of heavy weapons and creation of a 30-kilometer buffer-zone to put an end to bloodshed.

Ukrainian Prime Minister Arseniy Yatsenyuk blamed the Russian Federation of increasing tension in the conflict-torn region by allegedly backing and financing rebel groups. "I can say that the Russian party does not want to settle the conflict and implement the Minsk agreements," said Yatsenyuk during his visit to Kiev on Tuesday, the Anadolu Agency (AA) reported, referring to Russia not taking solid action to end the ongoing violence between Ukraine and pro-Russian separatists. Reportedly, Russian troops are still deployed in Ukrainian territories, as there have been no apparent withdrawals from either side.

Speaking at the latest NATO conference, he reiterated the necessity of a withdrawal of Russian troops from Ukrainian soil while referring to possible threats posed by Russia to Ukraine's sovereignty. The Ukrainian prime minister urged Russia to adhere to its international obligations by fully withdrawing from eastern Ukraine and stressed the need for Russia to respect the 12-point protocol agreement signed in Minsk.

Regarding the continued presence of "hundreds" of elite Russian soldiers in war-torn Ukraine's east, the European Union announced on Tuesday that biting economic sanctions would continue on Russia. The EU bloc stated that pressure on Russia would continue until the Sept. 5 agreement is "properly implemented."

According to a U.N. report, since the conflict started in April, some 3,500 people, including hundreds of civilians, have been killed and hundreds of thousands of people have been displaced from their country due to severe clashes between Ukrainian troops and rebel militias in the embattled Donetsk and Luhansk regions in the east of the country.