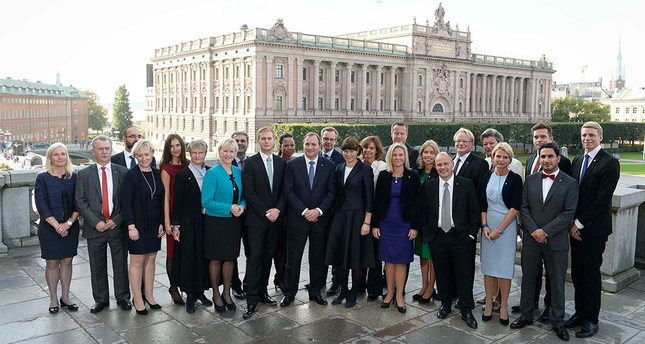 by Oct 03, 2014 12:00 am
"The conflict between Israel and Palestine can only be solved through a two-state solution, negotiated in accordance with international law," said Prime Minister Stefan on Friday and added that Sweden plans to recognize Palestine, as he announced the new two-party minority coalition's policy program.

Sweden will be the first major European country to recognize Palestine, and it is expected that the U.S. and the E.U. would likely to criticize this decision.

Sweden's situation is "serious," but the coalition is "ready to take on the task," Lofven said.

Lofven named former EU commissioner Margot Wallstrom as foreign minister. She was also to handle European Union affairs, while Peter Hultqvist of the Social Democrats was to be defense minister.

Wallstrom, 60, is one of only four ministers with previous government experience. She served as culture minister and minister of social affairs during the 1990s before, in 1999, becoming EU environment commissioner and later vice president. She has also been UN special envoy on sexual violence in conflicts.

"Developments in our eastern neighborhood will be one of our greatest challenges," Lofven said after criticizing Russia's annexation of Crimea and its role in "destabilizing" Ukraine.

Lofven said the government would not seek membership in NATO, but would pursue "increased cooperation" with its Nordic neighbors, the Baltic region, the European Union and the United Nations.

Combating climate change was another area Lofven highlighted, citing that the government aimed to increase investments in renewable energy sources and reduce emissions. Tighter security regulations would also be introduced for nuclear reactors.

As finance minister he named Magdalena Andersson, who has been Social Democratic spokesperson for economic affairs.

Kinberg Batra is expected to be one of Andersson's main opponents in coming parliamentary debates.

The coalition - which consists of Lofven's Social Democratic Party and the Greens - takes over after eight years under a conservative-led coalition.

Lofven noted he headed a minority coalition and that it would seek "broad cooperation" in parliament "in Sweden's best interest."

The government planned to introduce tougher legislation for sex crimes, including making it illegal to purchase sexual favors abroad.

In another move, the government planned legislation to ensure at least 40 per cent of board members in listed companies are women. The bill would be introduced in 2016, pending voluntary moves by companies.

The symbolic change of power took place at midday at the royal palace in the presence of the head of state, King Carl XVI Gustaf. Crown Princess Victoria was also there.

Lofven, 57, is leader of the Social Democratic Party, which has not ruled in coalition since 1957.

Six of the 24-strong cabinet are from the Greens; half of the cabinet members are women.

The Social Democrats were to handle the Justice Ministry portfolio, which includes migration affairs. They were also to be in charge of energy, enterprise, infrastructure, and employment.

Asa Romson, one of the two co-leaders of the Greens, was named deputy prime minister and minister for climate and environment.

She said it was "a historic day," as the Greens have never been member of a Swedish government since entering parliament in 1988.

Gustav Fridolin, the other co-leader of the Greens, was appointed education minister, while Isabella Lovin of the Greens was to leave the European Parliament to handle the development aid portfolio.