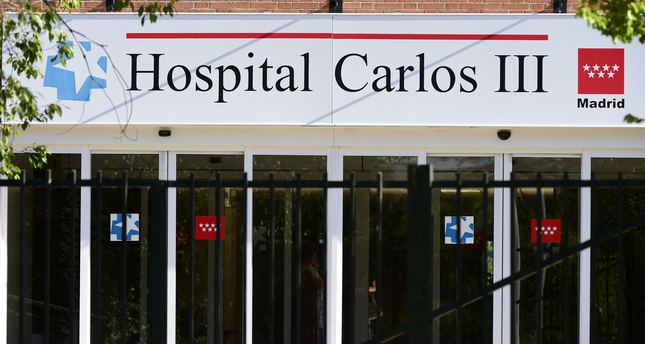 by Oct 06, 2014 12:00 am
An assistant nurse at a Madrid hospital where two Ebola patients died is infected with the virus herself, health officials said Monday, in what is believed to be the first time a person has contracted the disease in Europe.

"Two tests were done and the two were positive," a spokesman for the health department of the regional government of Madrid told AFP.
The woman works at Madrid's La Paz-Carlos III hospital where two missionaries who were repatriated from Africa with Ebola died from the disease, a spokeswoman for the hospital said.

"We do not know yet if she treated any of the two missionaries," said the spokeswoman. Heath Minister Ana Mato will give a press conference to discuss the case at 8:00 pm (1800 GMT).

Spanish priest Miguel Pajares, 75, was infected with Ebola in Liberia and died at the hospital on August 12. Another Spanish missionary, Manuel Garcia Viejo, 69, was repatriated from Sierra Leone and died at the hospital on September 25. Both were members of the Hospital Order of San Juan de Dios, a Roman Catholic group that runs a charity working with Ebola victims in Africa.

The Ebola virus causes fever, muscle pain, vomiting, diarrhoea and sometimes internal and external bleeding. It spreads through contact with the bodily fluids of someone who has the virus and the only way to stop an outbreak is to isolate those who are infected.

The Ebola epidemic that has been raging in west Africa has so far claimed almost 3,500 lives, with Liberia, Guinea and Sierra Leone worst hit.

There is no licensed treatment or vaccine for Ebola. Of several prototype treatments in the pipeline, one dubbed ZMapp has been fast-tracked for use, developed by Mapp Biopharmaceutical in California, in conjunction with the US Army.
Last Update: Oct 06, 2014 11:44 pm
RELATED TOPICS