Ebola-affected Spanish nurse raises concerns in EU and the US 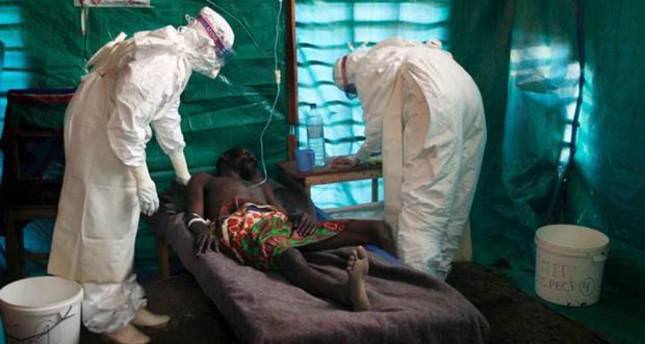 A Spanish nurse who was infected by the Ebola virus triggered fear due to its highly contagious nature while the U.S. called on the world to do more to battle the disease

In the first known transmission of the outbreak of Ebola outside West Africa, a Spanish nurse who treated a missionary for the disease at a Madrid hospital has tested positive for the virus, Spain's health minister said Monday.

The female nurse was part of the medical team that cared for a 69-year-old Spanish priest who died Sept. 25 in a Madrid hospital designated for treating Ebola patients after he was flown home from Sierra Leone, where he served as the medical director of a hospital there treating infected Ebola patients, Health Minister Ana Mato said. The nurse is believed to have contracted the virus from that priest, though she was also a member of the team that treated another Spanish priest who died earlier from Ebola.

More than 370 health workers in West Africa have become infected in the outbreak, and more than half of those have died. Doctors and nurses there have worked under difficult conditions, treating patients in overflowing wards, sometimes without proper protection. But even under ideal conditions, experts warn that caring for Ebola patients always involves a risk. World Health Organization (WHO) estimates the latest Ebola outbreak has killed more than 3,400 people. WHO on Monday night confirmed there has not been a transmission outside West Africa in the current outbreak prior to the Spanish nurse. WHO spokeswoman Fadela Chaib told The Associated Press that the only confirmed cases were in West Africa and the United States, with no known transmission outside West Africa. The organization is awaiting official notification of the case from Spanish authorities, she added. The Spanish nurse went on vacation the day after the priest died but checked in Sunday to a public hospital in the working class Madrid suburb of Alcorcon with a fever and was placed in isolation. Mato said the infection was confirmed by two tests. Antonio Alemany, Madrid's director of primary health care, told reporters that the woman had no symptoms besides the fever and that authorities were drawing up a list of people the nurse had contact with so they can be monitored.

He did not say where the married woman with no children spent her vacation, nor did he specify whether health authorities are checking people who she came into contact with where she went for vacation. She is the only person quarantined in Spain but her husband and health workers who cared for her during her admission to the hospital Sunday are being monitored. Authorities gave no details on how they were being monitored. The nurse cared for Manuel Garcia Viejo, who was in charge of the San Juan del Dios hospital in Lunsar, Sierra Leone. In August, she also assisted in the treatment of 75-year-old Spanish priest Miguel Pajares, also flown back to Spain from Liberia. He died after being treated with the experimental Ebola medicine ZMapp but authorities said Garcia Viejo was not given the treatment because worldwide supplies ran out.

Just after midnight Tuesday, the nurse was transferred from the hospital in Alcorcon for treatment at Madrid's Carlos III hospital, where the two priests were cared for until they died. She was taken there in a convoy of ambulances accompanied by a police escort. Spanish authorities said they were investigating how the nurse became infected at a hospital with modern health care facilities and special equipment for handling cases of deadly viruses. The virus that causes Ebola spreads only through direct contact with the bodily fluids of an infected person showing symptoms.

In a case underscoring the perils of caring for Ebola patients, a nurse in Spain has come down with the disease the first time the virus has spread outside West Africa during the current epidemic. The nurse's illness illustrates the danger that health care workers face not only in poorly equipped West African clinics, but also in the more sophisticated medical centers of Europe and the United States, said Dr. William Schaffner, an infectious disease expert at Vanderbilt University. "At greatest risk in all Ebola outbreaks are health care workers," he said.

The development came Monday as another American sick with the disease arrived back in the U.S. for treatment and President Barack Obama said the government was considering ordering more careful screening of airline passengers traveling from the outbreak region. The unprecedented Ebola outbreak this year has killed more than 3,400 people in West Africa, and become an escalating concern to the rest of the world. It has taken an especially devastating toll on health care workers, sickening or killing more than 370 in the hardest-hit countries of Liberia, Guinea and Sierra Leone places that already were short on doctors and nurses.

Meanwhile, the U.S. President Barack Obama vowed to increase the effort to battle Ebola, as some U.S. citizens also suffer from the disease. Obama says some foreign countries are not doing enough to confront the Ebola crisis in West Africa. He says the international community has not been as aggressive as it needs to be to help contain what he's calling a top national security issue for the United States. Obama says he intends to put pressure on other foreign heads of state to "make sure that they are doing everything that they can to join us in this effort." He said the chances for an Ebola outbreak in the United States are low, but he says his administration is working on additional screening protocols for international airline passengers both in the U.S. and overseas. Obama spoke Monday after meeting with his national security team.

Also, Public hospitals in New York City are concerned enough about Ebola that they've secretly been sending actors with mock symptoms into emergency rooms to test how good the triage staff is at identifying and isolating possible cases. A small hospital in the Ohio countryside has hung up signs, imploring patients to let nurses know if they have traveled recently to West Africa. And one of the largest U.S. ambulance companies has written step-by-step instructions on how to wrap the interior of a rig with plastic sheeting while transporting a patient. Ebola has yet to infect a single person on U.S. soil the one confirmed case here involves a man who contracted the virus overseas. But health care providers are worried enough that they are taking a variety of precautions.

The disease also affects the routes since several cruise lines have changed itineraries due to concerns over Ebola, canceling port stops in West Africa. On Holland America Line's 35-day African Explorer cruise aboard the MS Rotterdam, from Cape Town, South Africa, to Southampton, England, three ports of call in Ghana, Gambia and Senegal will be replaced with an added overnight in Cape Town, an added overnight in Cape Verde and a stop in Tangier, Morocco, according to Holland America spokesman Erik Elvejord. He said all guests were notified of the change in the trip, which departs Nov. 15.

CruiseCritic.com reported that cruise companies Regent Seven Seas, Seabourn and Fred. Olsen have also canceled port calls and changed itineraries to avoid areas that could potentially be affected. The countries hardest-hit by the Ebola outbreak Liberia, Guinea and Sierra Leone were not on the itineraries to begin with, but Senegal, which has reported one case, shares a border with Guinea. Other lines including Carnival, Royal Caribbean and Norwegian said they do not have ships traveling in the affected areas.