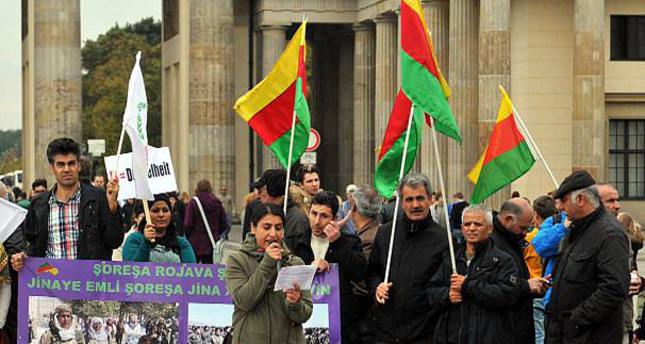 by Daily Sabah Oct 09, 2014 12:00 am
Since the beginning of the week, hundreds of Kurds in many European cities have protested against the massacres conducted by the Islamic State of Iraq and al-Sham (ISIS) in Kobani, a city in northern Syria – specifically in countries with large Kurdish populations such as Germany, France and Belgium. Kobani is Syria's third-largest Kurdish town, and ISIS has besieged it for three weeks, killing at least 400 people and causing at least 180,000 to flee to Turkey. The activists are demanding more help for the besieged Kurdish forces struggling to hold onto Kobani.

In Germany, home to Western Europe's largest Kurdish population, about 600 Kurds demonstrated in Berlin on Tuesday, according to police. In the capital city, a hundred people protested in front of the historic Brandenburg Gate, shouting slogans such as "stop the ISIS massacre" and "inaction means approval of terror." group The Kurdish Society Center (NAV-DEM) said that Kurds in Kobani need the support of the U.N. A of 500-600 people marched from the Turkish consulate to the U.S. consulate in Frankfurt overnight, calling for tougher action against ISIS. In Bonn, a group of demonstrators occupied the Deutche Welle building for a while and held a sit-in. There were also demonstrations in front of the broadcast centers of the WDR and NDR media stations.

On Wednesday in Hamburg, 14 people were injured in clashes between Kurdish protesters and a Salafist group. Police spokeswoman Karina Sadowsky said that the clashes happened after hundreds of Kurds held a protest. The police used water cannons to break up the protest and arrested 22. Other German cities also held demonstrations for Kobani such as Bremen, Dusseldorf, Hannover, Cologne, Gottingen and Stuttgart.

About 50 Kurdish protesters entered into the European Parliament on Tuesday. Several legislators met with the protesters, who staged a sit-in. EU Parliament President Martin Schulz, who received a delegation from the protestors, said he told protest leaders to end the demonstration peacefully and that he shared their concerns about the situation for civilians in Kobani. "I reiterated the support of the European Parliament for the international coalition fighting against the Islamic State in Syria and Iraq," Schulz said, adding that he promised to convey their message to NATO.

On Monday night, Kurdish protestors occupied the Parliament of the Netherlands for several hours and met Tuesday morning with legislators to press for more Dutch action against the insurgents, according to local media. Almost 200 Kurds also protested overnight on Monday and Tuesday at the French Parliament. "We do not understand why France is acting in Kurdistan in Iraq and not Kurdistan in Syria," said Fidan Ünlübayır of the Federation of Kurdish Associations of France. There were also demonstrations in Toulouse, Bordeaux and Marseille.