Turkey’s accession ‘back on track’ as EU seeks further cooperation 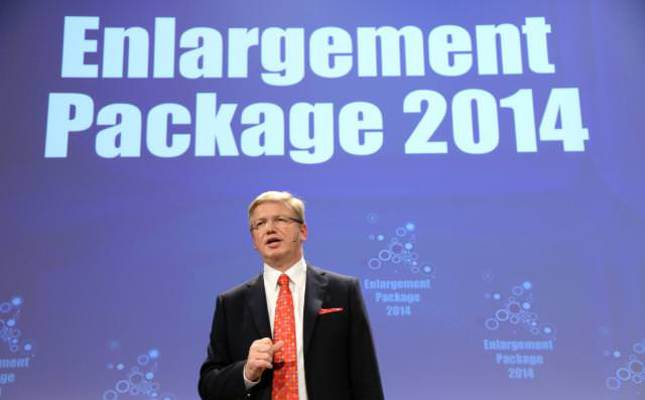 Thanks to its position as a strategic partner to the EU, Turkey's accession process has gained new momentum due to the EU's growing concerns over the Middle East crisis and the EU's economic deadlock. These global and regional challenges help Turkey play a crucial role in the eyes of the EU.

"The time has come to put the accession process back on track," said Štefan Füle, the Commissioner for Enlargement and the European Neighborhood Policy, on Wednesday in the press briefing on the 2014 Enlargement Package. "I believe it is time to rebuild the momentum. The implementation of the certain reform commitments by Turkey has continued, such as the 2013 democratization package and steps that had been taken towards the settlement of the Kurdish issue. Active and credible accession negotiations provide the most suitable framework for exploiting the full potential of EU-Turkey relations. Opening negotiations on the chapter of the rule of law would provide a road for reforms in these key areas," Füle said, while also highlighting areas related to Chapter 23 and 24.

In addition to the "positive agenda" launched by the EU and Turkey in May 2012 with the aim of expanding cooperation, the readmission agreement over illegal migrants who enter Europe via Turkey and the visa liberalization dialogue has also led to a renewed positive mood for Turkey's accession process. Turkey's new EU strategy paper, designed to accelerate the EU accession process, released by Turkey's EU ministry on Sept. 18 has also sent positive signs to the European Commission before the progress report was released.

Ahead of the presentation of the 2014 Enlargement Package to the European Parliament (EP), Daily Sabah attended a meeting with members of the EP from the delegation for relations with the Western Balkans and Turkey. Marietje Schaake, the substitute member of the Committee on Foreign Affairs, urged Turkey to open chapter 23 and 24 "as soon as possible" in order to deal with the procedures in fulfilling the negotiation process. Regarding common perspectives on foreign policy and security issues, the "EU should be more ambitious about work with Turkey," she said.

"More than ever, Turkey and the EU need each other," said Füle in a statement released on Wednesday over the progress report on Turkey. Stressing the need for more cooperation primarily over foreign policy, he called on both sides to maintain a closed dialogue in order to tackle challenges. Regarding the EU's concern over the worsening situation in Syria and Iraq, he underscored the importance of Turkey's role in preventing the massive influx of refugees to the EU. "The situation in our shared neighborhood where Turkey plays a key stabilizing role, as recently demonstrated by its massive support to Syrian, Kurdish and Iraqi refugees, deserves a strengthened dialogue on foreign policy," Füle said. "We share common challenges in the region and beyond. In the spirit of the positive agenda, we need to tackle them constructively," he added.

Apart from the EU's concern over foreign policy, it would also seek to extend economic cooperation with Turkey that has long been considered a key business partner for the EU. Amid increased geopolitical tension in the Middle East and shaky growth in the EU member states, Füle called on European companies to engage in more dialogue with Turkey. With Turkish economic growth set to continue by 6 percent, as it has on average since 2010, he said, "Our cooperation in the energy sector is still far beneath what is needed. Our companies could profit more from trade, supported by enhanced economic dialogue and a robust business platform bringing together the European and Turkish business communities."

Turkey, among other candidate and potential candidate countries, has had the longest accession process in history. Turkey applied for full membership in 1987. However, the accession negotiations only started in October 2005 with the extension of the Custom Union to all member states including Cyprus. Lately, Chapter 22, which covers regional policy and coordination of structural instruments, was opened on Nov. 5, 2013.