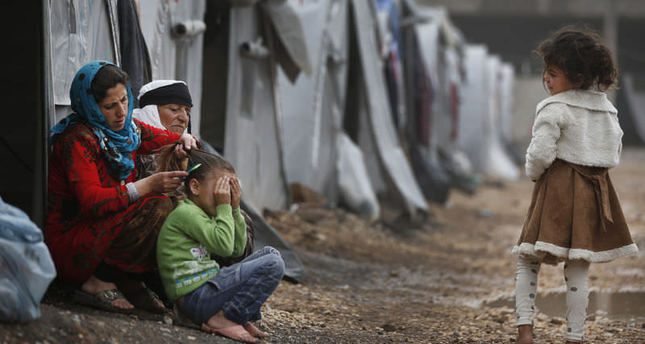 by AA Oct 13, 2014 12:00 am
The European Commission announced Sunday that it will allocate 3.9 million euros (TL 11.2 million) in humanitarian aid to the Kobani refugees who have fled their homes due to the violent onslaught from the Islamic State of Iraq and al-Sham (ISIS) on the Syrian border town. The funding includes providing clean water, shelter and medical assistance to refugees. "This adds further to the impact of what is already the biggest humanitarian crisis of our time," Kristalina Georgieva, Commissioner for International Cooperation, Humanitarian Aid and Crisis Response said in a statement on Sunday. "We are urgently directing needed funds to help the humanitarian organizations on the ground deal with the massive influx of refugees," she added. More than 180,000 Kurdish refugees have fled into Turkey since ISIS launched an offensive on Kobani three weks ago. The funding is "part of the European Commission's 150 million euros humanitarian aid budget for the Syrian crisis in 2014." Recently, the European Commission has stepped up its humanitarian assistance to more than a million refugees seeking shelter in Turkey due to the crisis in Syria. The EU, with a joint action by the Commission and member states, has allocated nearly 3 billion euros of funding in humanitarian, development, economic and stabilization assistance so far.