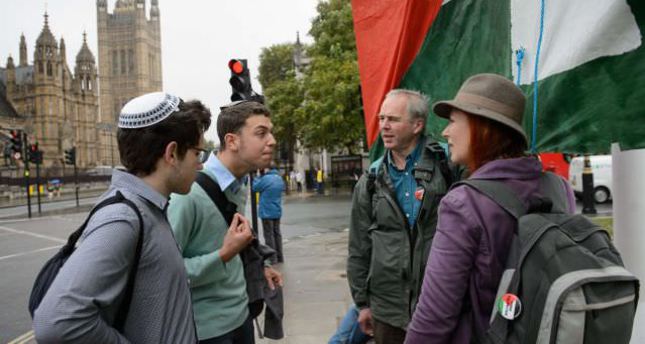 by Daily Sabah Oct 15, 2014 12:00 am
Symbolic recognition of Palestine statehood in the U.K.'s Commons Parliament has drawn anger from Israel as well as sparking widespread international debate. Although the accepted motion is non-binding for the British government, it could end up shifting dynamics in the EU. The motion came two weeks after Sweden's prime minister made a statement saying that Sweden would also recognize Palestine. The move is a significant step for Palestinians in their pursuit of international recognition.

Phyllis Bennis, from the Institute for Policy Studies, told Al Jazeera that while the vote would make no difference on the ground, it would be a mistake to deny its importance. "This is a statement from the closest U.S. ally and perhaps the most influential country in Europe on this question to say that it is not prepared to go along with the U.S. position that only U.S.-orchestrated diplomacy that is based on this nonsense about the two sides coming together as if they were equals...rather than an occupier and an occupied population," she said.

The Israeli Foreign Ministry criticized the resolution with a written statement. "Premature international recognition sends a troubling message to the Palestinian leadership that they can evade tough choices that both sides have to make, and actually undermines the chances to reach a real peace," the statement said.

Lawmakers in Britain's lower house of parliament voted by 274 to 12 to pass the motion stating: "That this house believes that the government should recognize the state of Palestine alongside the state of Israel as a contribution to securing a negotiated two-state solution." The motion was backed by 39 Conservative lawmakers and 192 Labour parliamentarians including party leader Ed Miliband after four-hour-long debates in parliament. The British government is not bound to act on the motion and said it would only recognize a Palestinian state at the appropriate moment. Prime Minister David Cameron abstained from the vote along with other ministers in the coalition government. In the name of the government, the U.K. minister at the Foreign and Commonwealth Office, Tobias Ellwood argued that Palestinian statehood could only become a reality when the occupation ends and stressed that the U.K. believes "this will only come through negotiations."

The former U.K. foreign secretary, Jack Straw, said that the vote was not simply a gesture, because if it were, the Israeli government would not be as worried by the vote. The Israeli government, he said, wants the recognition of the Palestinian state only after the successful conclusion of any negotiations. But Straw said "such an approach would give the Israelis a veto over whether a Palestinian state should exist."

The Israeli onslaught on Gaza this summer brought the statehood of Palestine back to the top of the agenda for many European parties. U.N. Secretary General Ban Ki-moon visited Gaza on Tuesday for the first time since the war. He said his visit is to "listen directly to the people of Gaza," and called the situation "beyond description" needing a speedy reconstruction effort.