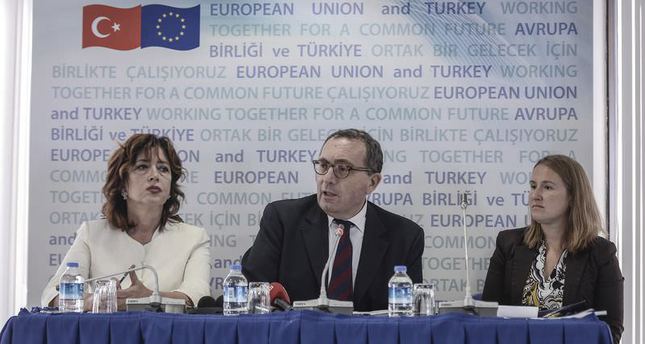 Head of the European Union Delegation to Turkey, Stefano Manservisi, has called for creating "conditions for free circulation of persons".

The EU and Turkey will benefit both if Turkish citizens are allowed visa-free travel to the 28-nation bloc, Head of the European Union Delegation to Turkey, Stefano Manservisi, told Anadolu Agency Friday.

"We have to create conditions for free circulation of persons. This is in the interest of the EU and Turkey," Manservisi said.

Last Monday, the EU Commission released a report on visa liberalization, which stated that Turkey's efforts were "effective" to meet the bloc's requirements for allowing Turkish citizens to travel to the EU without a visa.

The EU's first progress report on the visa roadmap acknowledged the progress the country made in developing its civil registry system and reforms adopted in the field of migration and international protection.

"There are 70 requirements from Turkey listed in the report, and we have met all, but nine of them," Turkey's EU Minister Volkan Bozkir said Wednesday. "Some of these requirements have been fulfilled partially, while others have been met in full."

"There is no deadline, but I am convinced that all requirements will be fulfilled in two years," he said.

The European Commission launched a visa liberalization dialogue with Turkey on December 16, 2013, setting out a list divided into five chapters of what Turkey must achieve to enable Turkish citizens to travel to the EU without a visa.

The dialogue was initiated in parallel with a readmission agreement that would result in illegal migrants who enter Europe via Turkey returning to Turkey. The agreement will enter into effect on December 16, 2016.

"We need to have a properly functioning readmission agreement before the visa liberalization. This is a condition written in the roadmap," Manservisi said, adding it was not a difficult issue, and "can be fully implemented without any problem".

- No need to fear huge influx of Turkish immigrants

Addressing concerns among EU member states regarding a massive influx of Turkish people emigrating to the bloc, Manservisi brushed them off. "I don't think Europe will be flooded by Turkish immigrants once the visa-free regime starts. Nobody thinks so."

"We should create conditions to get out of this sort of mentality and fear," he said, noting, however, that there should be some conditions in place to prevent an abuse of the system.

"We have to work together in order to limit this," he said.

Manservisi was also quick to ease worries on the Turkish part regarding the readmission of a huge number of irregular migrants to Turkey.

"The number of illegal migrants coming in the EU through Turkey peaked in 2010 and 2011, when basically the controls of the Greek border were under stress. Now the numbers are not huge," he said.

Bozkir had also commented on this issue last Wednesday, saying the number of illegal migrants dropped from 700 in 2011 to around 300 in 2013.

"The ones who have applied for asylum, and are eligible for asylum won't be sent back to Turkey, and this includes Syrians as well," Manservisi said, adding that each case of readmission must be assessed on its own merit.

"So, I don't believe there would be an effect in two years that you will discover that there are hundreds of thousands of irregular migrants that would suddenly be returned to Turkey."