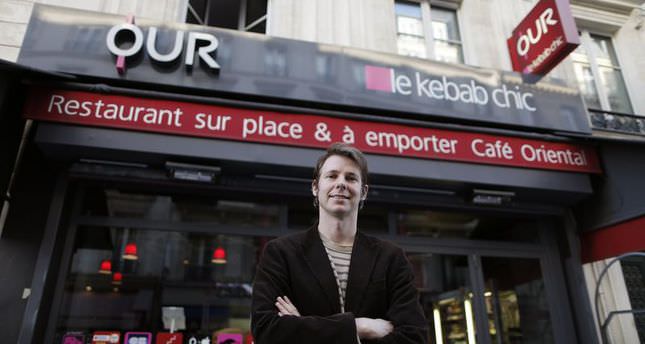 by Oct 28, 2014 12:00 am
In a country whose national identity is so closely connected to its cuisine, France's hard right has seized on a growing appetite for kebabs as proof of cultural "Islamisation".

Four kebab houses opened last month in Blois, bringing the total to over a dozen in the pretty Loire valley town where tourists come to see the castle. The far-right National Front party railed: "The historical centre of Blois, the jewel of French history, is turning into an Oriental city".

The implicit message is clear: the now ubiquitous kebab, popular with the young and cash-strapped, is a sign that Middle Eastern culture has taken root in France, where not everyone is happy about the presence of 5 million Muslims.

"The kebab is a bit of a reflection of all the problems with immigration and integration in France," says Thibaut Le Pellec, founder of KebabFrites.com, a website that ranks kebab houses across the country and seeks to raise the reputation of the "kebabistes" who make and sell the food.

Damien Schmitz, who runs a kebab shop in Paris, puts it more bluntly: by criticising the kebab, he says, "you can speak ill of Muslims without speaking ill of Muslims."

Introduced by Turkish immigrants to Paris in the 1990s, the doner kebab -- where meat is carved off an upright rotating spit and served in a flatbread with salad and spicy sauce -- quickly found favour with France's North African population raised on spiced halal meat in tagines and stews.

The dish adapted to the French palate, served in crusty bread, with the addition of a creamy white sauce and side of fries.

Now, some 300 million kebabs at about 6 euros each are eaten in 10,200 outlets in France each year, putting the 1.5 billion euro ($1.9 billion) industry just behind burgers and pizza, according to Gira Conseil, a market research company.

Kebabs are everywhere - in cities and towns, in supermarket freezers and drive-throughs. One brand of potato chips is even kebab-flavoured, and advertised by Yohan Cabaye, a white footballer who plays for France and Paris Saint-Germain.

But despite its rapid rise in popularity, the kebab has a lingering reputation -- perpetuated in part by hidden-camera TV shows that have exposed some insalubrious kitchen conditions -- of greasy junk food served in dodgy corner shops by non-assimilated Muslim immigrants.

With food often used as a metaphor for French identity, the National Front has made a campaign issue of opposing the widespread supply of halal meat, something it sees as Islam impinging on French traditions.

The metaphor is not restricted to meat. One right-wing politician created a furore in 2012 by repeating an unsubstantiated anecdote about how a schoolchild had a 'pain au chocolat' -- a quintessential French pastry -- snatched from his hands by Muslims who were fasting for Ramadan.

Campaigning for local elections last March, National Front candidates across the country criticised the rise of kebab shops, with one coining the phrase that France was undergoing a "kebabisation".

The contrast is sharp with Germany, where the ever-present doner kebab is viewed as a positive symbol of Turkish integration into German society.

Chancellor Angela Merkel has been photographed slicing a doner on at least three occasions, while British opposition leader Ed Miliband wrote to industry website British Kebab hailing the "hard work and dedication of businesses in this industry to bringing high quality food at affordable prices".

No French politicians have done anything similar.

"We're not asking anyone to sing the praises of kebabs or to make kebabs a French dish, as we know that will never happen," said Ilhan Arslan, who in 2006 launched France's first chain of kebab restaurants, O'Kebap, now with 13 outlets and growing.

"But it's just like the image France has today with its own immigrants ... they bring a richness to France and yet France doesn't embrace that," added Arslan, whose father was a kebab shop owner in Izmir, Turkey. "It's the same thing with kebabs."

Kebab shops that draw meagre foot traffic often arouse allegations of being fronts for money laundering, but such accusations are greatly exaggerated, say those in the industry.

More damaging are charges of rampant food safety violations. Yet one health inspector, who requested anonymity as he was not authorised to speak to the media, said those lapses were no more prevalent in kebab shops than in other restaurants.

Still, more French are learning to trust their stomachs, rather than the hype.

In Blois, kebab shop owner Öznur Puskulle acknowledged that for some "when you say kebab, you mean Arab", but said that attitude was changing and noted her clientele was "all French".

"When I was young, kebabs were really for foreigners. Now I see the kebab is open to everyone. It's evolved," she said.

Schmitz, who quit his job as a strategic consultant to open his kebab house, OUR, near Paris Saint-Lazare station, kebabs are following the path pioneered by burgers, pizzas and sushi -- once seen as a foreign intrusion but now completely accepted.

Today's image problems will fade with the next generation, he argues, noting that the arrival of pizza in the 1960s brought with it charges of "dirty Italian shopkeepers who don't speak French and stink of sweat."

"If I didn't think it was possible someday, I wouldn't have done it," said Schmitz, who even hired Michelin-starred chef Philippe Geneletti to create a low-fat, slow-marinated artisanal "chic kebab".