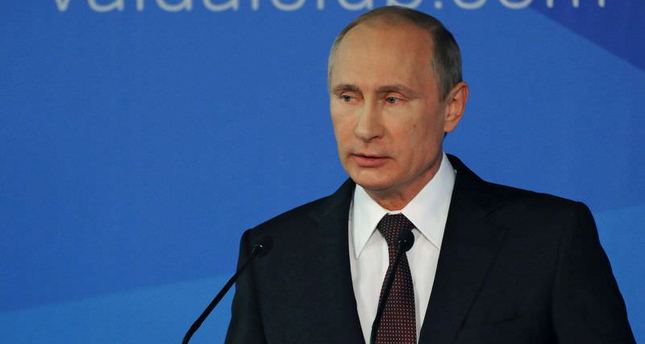 by Daily Sabah Oct 29, 2014 12:00 am
Russian authorities announced on Tuesday that the Moscow government will recognize the separatist elections held in two rebel-controlled regions in eastern Ukraine, a move that would presumably "undermine the [peace process] on de-escalation and peaceful resolution" that was agreed under the Minsk protocol dated Sept. 5 and the Minsk memorandum dated Sept. 19. Regarding the simultaneous polls in the self-proclaimed People's Republics of Donetsk and Lugansk, "We are counting on it being a free vote and that it will go ahead unhindered," Russian Foreign Minister Sergei Lavrov said in an interview Tuesday, AFP reported. The Russian minister also stated that the separatist elections would be an important step on the path toward legitimizing the authority of the Donetsk and Lugansk regions.

A law granting self-rule to the rebel-held eastern region was approved by the Ukraine parliament in September as part of a peace deal aimed at ending the month-long separatist fighting. However, the pro-Russian rebel groups rejected the law as they have been seeking full independence backed by Russia since they declared their autonomy in May through holding an independence referendum which was not recognized by the Kiev government.

During Sunday's general election, 3 million people living in eastern Ukraine did not cast their ballots, as no polling booths were allowed to be placed in the rebel-held areas. As a signal to the Ukraine goverment, the separatist authorities in the Donetsk and Lugansk areas changed clocks and adopted Moscow time on Sunday, AFP reported.

Ever since the cease-fire agreement came into effect, the heavy fighting has continued in the embattled east. The ongoing clashes have turned the city of Donetsk into a combat zone, as the rebel groups continue to attack Donetsk airport. Since the fighting erupted, at least 3,660 people have been killed and 8,756 wounded in eastern Ukraine as of Oct. 6, the U.N. reported. The ongoing armed conflict has left many people in worsening humanitarian conditions as some armed groups continue to terrorize civilians in areas where the conflict has been continuing. "Fighting in the east, and the resulting breakdown of basic services, continues to drive more people from their homes," the U.N.'s refugee agency (UNHCR) spokesman Adrian Edwards told journalists in Geneva on Oct. 24. He emphasized the increasing "need for humanitarian aid particularly around the cities of Donetsk, Kharkiv and Kyiv, and in the Dnipropetrovsk and Zaporizhzia regions" where some 95 per cent of the displaced people are concentrated in miserable living conditions. The total number of Ukraine's internally displaced population is estimated at around 430,000 people. As the fighting continues, some 170,000 people were displaced from eastern cities at the start of September.