UK refusal to back rescue mission for migrants ‘immoral’ 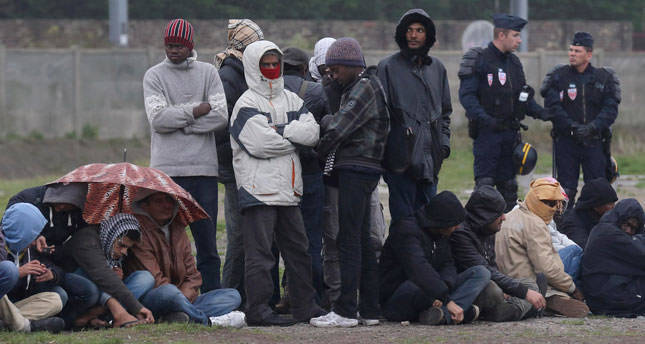 Amid growing pressure on the British government to take a tougher line on border and immigration policies, the British government's denial to support search and rescue missions to save refugees in the Mediterranean Sea has faced growing criticism. The Guardian newspaper considered the latest move as "an outrageous and immoral act." There has been a growing anxiety among Britons over the increasing number of immigrants entering the U.K. and Britain has refused to participate in rescue missions to save migrants attempting dangerous sea crossing. The denial came on the basis that such mission would create a "pull factor" for illegal immigration while encouraging more migrants to leave their home countries to live under the better conditions that exist in the U.K. The political debate in the U.K. over immigration policy has become increasingly heated as Prime Minister David Cameron and other party leaders have hardened their stances on the issue.

Amnesty International's U.K. director, Kate Allen, condemned the decision agreed on by Home Secretary Theresa May, to The Guardian saying, "This is a very dark day for the moral standing of the U.K. When the hour came, the U.K. turned its back on despairing people and left them to drown."

"The vague prospect of rescue has never been the incentive. War, poverty and persecution are what make desperate people take terrible risks. History will judge this decision as unforgiveable," she added.

Britain's border and immigration system is a "mess," lawmakers said on Wednesday in a report that could increase pressure on Cameron's government to take a tougher line on migrants ahead of next year's national election. Opinion polls show immigration is a major concern for voters and it has fueled the rise of the U.K. Independence Party (UKIP), which may sink Cameron's chances of staying in power after the May election by splitting the conservative vote. The anti-immigration UKIP backs stronger immigration curbs and the U.K.'s exit from the EU.

Cameron's reform plan on cutting the number of low-skilled EU immigrants has received severe criticism from the EU Commission former, president José Manuel Barroso, who accused the U.K. of making a "historic mistake." The latest British move is expected to hit the 11 Eastern European states whose citizens benefit most from EU immigration policy that supports freedom of movement within the EU. There has been growing concern over the increasing number of immigrants living in the country. This led to an increase in votes for the anti-EU and UKIP over the past year. The border control and security issue has been placed at the heart of its electoral campaigns as recent opinion polls show that there is a steady increase in support for UKIP. Britain's immigration cap, which applies to immigrants from Eastern European member states, has faced severe criticism from both former Barroso and the current president of the EU Commission, Jean Claude Juncker, who have said that the immigration cap would create "first and second-class citizens" within the EU while endangering the free movement of people that is guaranteed as one of the founding principle of the Treaty of Rome of 1957.

Anti-migration rhetoric has been increasing among Britons as British Defense Minister Michael Fallon said on Sunday the government was considering curbing the number of EU citizens allowed to work in Britain in order "to prevent whole towns and communities being swamped by huge numbers of migrants."