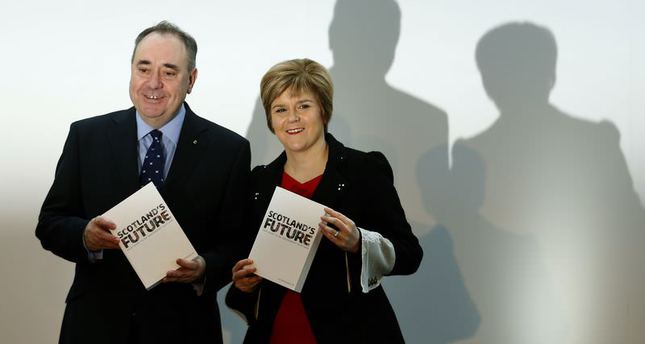 by reuters
Nov 02, 2014 12:00 am
Scotland will break away from the United Kingdom within 20 years, the defeated leader of the Scots nationalists predicted on Sunday, after a poll showed a majority of voters would back independence if another referendum were held today.

In September, 55 percent of Scots voted to reject independence in a historic referendum after Britain's three main UK-wide parties promised to grant greater devolution to Scotland in the event of a "No" vote.

But in a surprise poll on Saturday, 52 percent of those asked said they would now vote for a breakaway.

Disagreements over how much more power Scotland will get and over separate proposals to stop non-English lawmakers voting on matters that concern England in the British parliament have clouded the referendum's aftermath, with the Scottish Nationalist Party (SNP) accusing other parties of backsliding.

Alex Salmond, the SNP's outgoing leader who unsuccessfully spearheaded the independence campaign, said on Sunday the desire for change was so strong, even among those who voted no, that independence was now inevitable.

Asked if he thought Scotland would become independent in the next 10 or 20 years, Salmond said "Yes".

"The destination is set. But the number of stops along the way and the exact timetable I think that's to be determined," he told BBC TV.

"It will actually be determined by the Scottish people."

The SNP lost the referendum but has bounced back and its ratings remain high. A poll last Thursday showed 52 percent of voters planned to vote for the pro-independence party in a UK-wide election in May next year.

By contrast, the opposition Labour party, which campaigned against independence, faced a wipe-out in its traditional stronghold of Scotland, the same poll showed, raising doubts about the left-leaning party's ability to unseat Prime Minister David Cameron's Conservatives.

With the May 2015 election shaping up to be the closest in modern British political history and neither Cameron's Conservatives nor Labour currently looking like they can win an outright majority, the winner may need to rely on support from other parties.

Salmond on Sunday ruled out a coalition with the Conservatives saying there was "no chance whatsoever" of such a tie-up. He said an alliance with Labour was "unlikely" but said circumstances could change.

Nicola Sturgeon, who will take over as SNP leader from Salmond, said widespread distrust of promises of greater Scottish devolution coupled with a desire for change were fuelling a continued appetite for full-blown independence.

"There is a very, very strong mood for change in Scotland," Sturgeon told Sky News.

"If you take the 45 percent of people who voted yes in September and add to that the many people who voted no but did so on the promise of significant more powers for the Scottish parliament then what you have is a majority, arguably a very strong majority in Scotland for substantial change."

Sturgeon has hinted her party might push for another independence referendum as early as 2017 if a European Union membership referendum promised by Cameron takes place and results in a British EU exit.

Most Scots would like to remain inside the 28-nation bloc but Euroscepticism is on the rise in England where the anti-EU UK Independence Party (UKIP) won its first seat in parliament last month.

That sets the stage for a potential political and constitutional tussle if different parts of the United Kingdom vote in different ways in an EU membership referendum which could reopen the Scottish question.

Given that less than two months have passed since Scots rejected independence by a 10 point margin after a lengthy campaign some of the SNP's opponents believe it is getting ahead of itself.

"Listening to the political debate in Scotland in recent weeks, it's as if the referendum result had turned out on a yes vote," Jim Murphy, a Labour lawmaker in the British parliament and a candidate to lead the party in Scotland, told BBC TV.

"It was a two-horse race. It wasn't even close, there were two million people and more that voted no in the referendum, and yet the horse that lost that two-horse race has spent the last six weeks parading round the winning enclosure."