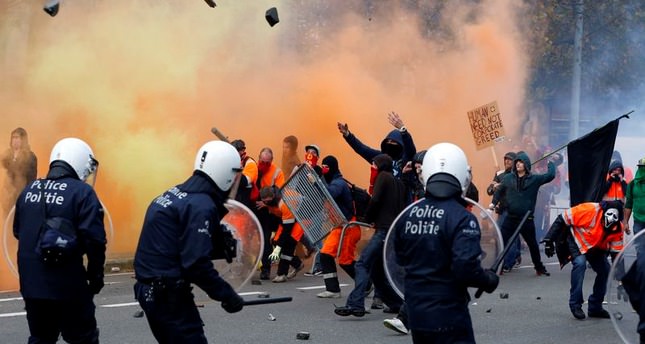 by Associated Press
Nov 06, 2014 12:00 am
One of Belgium's biggest postwar labor demonstrations brought some 100,000 workers to the capital on Thursday to protest government free-market reforms and austerity measures that they claim undermine Belgium's vaunted welfare state.

For two hours, the demonstrators peacefully marched down the main thoroughfares of central Brussels to protest government policies that will raise the pension age, contain wages and cut into public services. Violence marred the end of the march, with police firing tear gas and the water cannon to break up incidents. No casualties were immediately reported.

"They are hitting the workers, the unemployed. They are not looking for money where it is, I mean, people with a lot of money," said Philippe Dubois, who came from the industrial rust belt of Liege.

The march, which was unexpectedly large, opens a monthlong campaign by the trade unions against the business-friendly governing coalition and is to be capped with a nationwide strike on December 15.

Despite the opening of government-led talks with employers and unions later on Thursday, Socialist trade union leader Rudy De Leeuw vowed to continue the protests in the coming weeks.

Belgium has a long postwar tradition of collective bargaining between employers and workers, and successive coalition governments representing a full scale of public opinion have often been able to contain social disagreements. But the current coalition, made up of three pro-business parties and the centrist Christian Democrats, is the first in decades that has been able to set such a clear free-market agenda.

The government says it has been forced to push through stringent austerity measures to keep the budget deficit within European Union constraints and insists that businesses need more lenient tax policies to become more competitive in the global market.

The trade unions object to government policies that promise to raise the pension age from 65 to 67, freeze the automatic link between wages and inflation, and cut public services in a way that would affect the entire population.