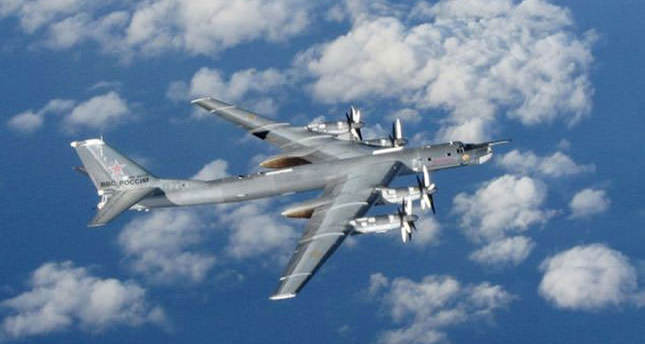 by daily sabah
Nov 07, 2014 12:00 am
Following violations of Finnish airspace by Russian military aircraft in recent weeks, Finland warned EU countries and the U.S. to take affirmative action against the Russian threat that has ignited old Cold-War fears and rhetoric in ex-Soviet Baltic States. Russian involvement in the conflict in eastern Ukraine and its annexation of Crimea has led to growing fears among northern European states including Sweden, Finland, Latvia, Estonia and Lithuania.

"[Russian President Vladimir] Putin keeps saying the West and NATO are hostile," Finnish President Sauli Niinistö said to the Guardian, a British newspaper. "[He says] they have deceived Russia with NATO enlargement and they are undermining and humiliating Russia. So this is a situation that is not promising. I have said we are almost at the gates of a new kind of Cold War that could suck in all of Europe.

"The Finnish way of dealing with Russia, whatever the situation, is that we will be very decisive to show what we don't like, where the red line is. And that is what we are prepared to do," he added stressing the "provocative" operation of Russian jets over European airspace.

Niinistö's comment came before the prime ministers of Scandinavian and Baltic countries and the U.K. met on Thursday to discuss education and business initiatives at the Northern Future Forum seminar hosted by Alexander Stubb, Finland's prime minister, which took place in Helsinki on Nov. 6-7.

British Prime Minister David Cameron also attended the conference, which gained significant attention after the leaders of the Baltic states urged for stronger European policies toward increasing Russian aggression. Amid Britain's call for an exit from the EU, the northern European countries stressed the importance of Britain's role in Europe in building a strong bloc in the face of Russia.

The ex-Soviet Baltic states have seen Russia as a clear threat to their national security and territorial integrity. After the annexation of Ukraine's Crimean peninsula by Russia in March there has been a growing fear among northern European states that the Cold War years are returning.

Known for her tough stance on Russia, President Dalia Grybauskaite of Lithuania urged NATO to boost its presence against a possible Russian threat in the Baltic region and then welcomed the arrival of American troops in April due to security concerns. Before she was elected president in May, she asserted that Russian foreign policies on its neighboring countries have posed a serious threat to the security of the Baltic region. Continuing her tough talk on Russian military intervention in Ukraine and its continuing efforts to destabilize the region, she asserted in her statement that Russia is still trying to revive the Soviet dream to "redraw the post-war map and borders."