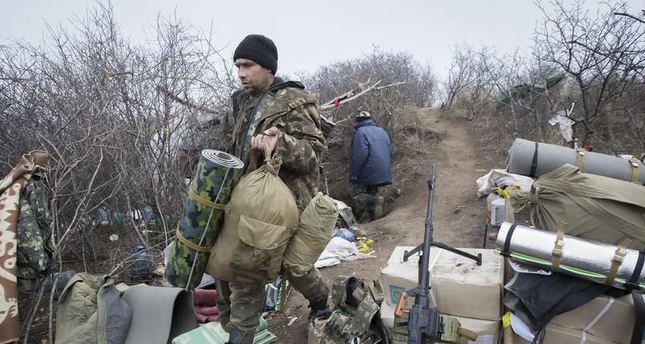 by French Press Agency - AFP
Nov 09, 2014 12:00 am
Artillery fire rocked east Ukraine's rebel stronghold of Donetsk on Sunday as separatists appeared to be reinforcing frontline flashpoints and fears grew of a return to all-out fighting. The boom of shelling rumbled on mid-morning on the edge of Donetsk, where government forces are facing off against insurgent fighters, but was less intense than overnight when heavy mortar fire was heard close to the center for around two hours, an AFP journalist reported. It was the most intense combat in the region since a barely-observed ceasefire was signed in September. An AFP crew saw a convoy of 20 military vehicles and 14 howitzer cannons without number plates or markings driving through the rebel town of Makiivka in the direction of the nearby frontline around Donetsk, where Ukrainian troops are struggling to maintain a scrap of control.

The Organization for Security and Cooperation in Europe (OSCE) voiced concern Saturday after its monitors witnessed unmarked columns of tanks and troop carriers moving through east Ukraine in territory held by pro-Russia separatists. The OSCE report came a day after Ukraine's military said a large convoy of tanks and other heavy weapons entered the country from Russia across a section of border that has fallen under the control of rebel fighters. Russia denies being involved in the fighting in the east. However, it openly gives the rebels political and humanitarian backing and it is not clear how the insurgents could themselves have access to so much sophisticated and well-maintained weaponry.

Last March, Russian soldiers without identification markings took over the southern Ukrainian region of Crimea, and Moscow annexed the region shortly after. The OSCE reports from the east came as fears mounted of a total breakdown in the ceasefire signed in September in a bid to end the war, which has killed some 4,000 people, according to UN figures. Ukraine's military said Sunday that their positions across the region were shelled 21 times overnight, leaving two servicemen injured. That follows a bloody day Saturday when Kiev reported eight of its soldiers killed within 24 hours. Seventeen other soldiers were wounded in shelling, the military said. Several military columns have been seen by foreign journalists in the east in recent weeks, and Ukrainian officials regularly accuse Russia of covertly deploying troops.

However, these reports are often dismissed by Moscow and by the separatist leaders as inaccurate or invented. The OSCE's statement was important because it is likely to carry more weight. "More than 40 trucks and tankers" were seen driving on a highway on the eastern outskirts of Makiivka, said the OSCE representatives, who are in Ukraine to monitor the two-month ceasefire. "Of these, 19 were large trucks, Kamaz type, covered, and without markings or number plates, each towing a 122mm howitzer and containing personnel in dark green uniforms without insignia. Fifteen were Kraz troop carriers," the report said. Separately, the OSCE monitors said they had seen "a convoy of nine tanks moving west, also unmarked" just southwest of Donetsk. The OSCE said all these forces were on territory controlled by the separatists' self-declared Donetsk People's Republic. Russian President Vladimir Putin is gearing up for a fraught week of diplomacy with visits to the APEC summit in Beijing and Group of 20 meeting in Brisbane, Australia, where he looks likely to face a hostile reception from Western leaders. The last Soviet leader, Mikhail Gorbachev, said the world "is on the brink of a new Cold War" sparked by Ukraine. "Some are even saying that it has already begun," Gorbachev said at an event Saturday marking the 25th anniversary of the fall of the Berlin Wall.