Ukraine on the edge of return to all-out fighting 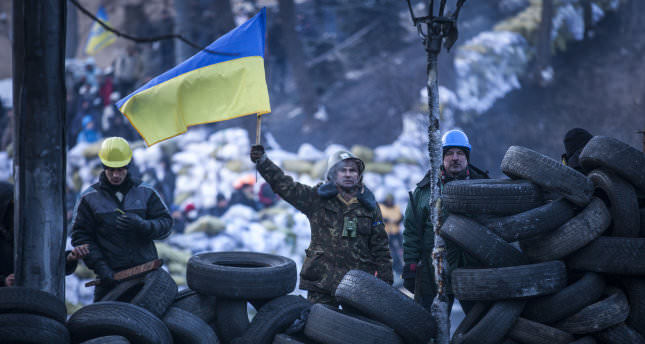 by daily sabah
Nov 11, 2014 12:00 am
Increased movements of Russian troops and equipment in the rebel-held areas in eastern Ukraine has signaled a possible return to all-out fighting after clashes were partially stopped by a peace deal signed under the Minsk Protocol of September 5 and the Minsk Memorandum of September19. Two humanitarian convoys of 17 trucks from Russia have been sent to areas in the east of Donetsk, controlled by the so-called "Donetsk People's Republic," carrying "artillery and multiple-launch rocket systems," according to a report released on Sunday by the Organization for Security and Cooperation in Europe's (OSCE) special monitoring mission to Ukraine.

In addition to reports of Russian military reinforcements in eastern Ukraine, intensified weekend shelling around the rebel stronghold of Donetsk has raised fears that pro-Russian rebels may gain significant ground with increasing Russian backing and support, a charge that Russia severely denies. Since the cease-fire agreement came into effect in September, the heavy fighting has continued in the embattled east. The ongoing clashes have turned the city of Donetsk into a combat zone, as the rebel groups continue to heavily attack the airport in Donetsk.

As tensions simmer in the east of the country, the West has condemned the increasing movement of Russian troops in the restive east who retain a strong influence over the separatists. The further Russian incursion into Ukrainian territory is seen as a violation of Ukraine's territorial integrity. Regarding the severity of the worsening situation in the eastern European country, Germany called on all sides to respect a cease-fire set by an agreement in the Belarussian capital Minsk.

"Unfortunately, the situation is again serious. I now think that we must call upon all those involved in this conflict, as well as the Russian side, to return again to the terms of the Minsk protocol," German Foreign Minister Frank-Walter Steinmeier told a news conference on Monday during a visit to Kazakhstan.

The European Union has voiced its concern over the "Russian convoys in separatist held areas with substantial amounts of heavy weapons, tanks and troops," that were reported on by the OSCE Special Monitoring Mission in Ukraine. While calling on all sides to "avoid any re-escalation of hostilities," the E.U. put emphasis on "finding a peaceful sustainable solution based on respect for Ukraine's independence, sovereignty and territorial integrity," said the EU High Representative Federica Mogherini, in a statement on the latest hostilities in eastern Ukraine.

The U.S. also urged Russia to halt actions that violate Ukraine's sovereignty. "It would be another blatant violation of the Minsk agreement signed by Russia and the separatists. We continue to emphasize the need for full and immediate implementation by the separatists and Russia of all their commitments under the September 5th Minsk Protocol. Russian forces and weapons must be withdrawn from Ukraine. Ukrainian sovereignty must be restored along the Ukrainian side of the international border, and that border needs to be monitored by the OSCE, and all hostages must be released immediately," said State Department spokesperson, Jen Psaki in a press briefing on Friday.