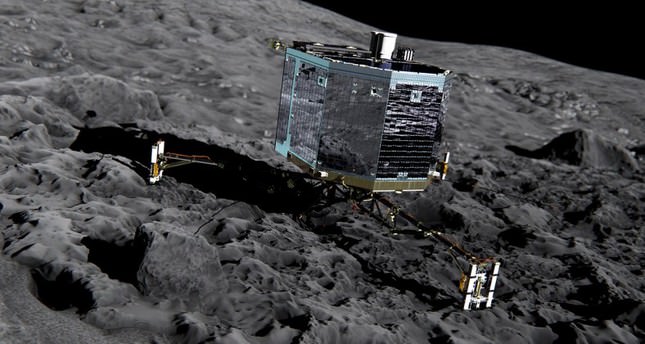 by Associated Press
Nov 12, 2014 12:00 am
Hundreds of millions of miles from Earth, a European spacecraft made history on Wednesday by successfully landing on the icy, dusty surface of a speeding comet in an audacious cosmic first, designed to answer big questions about the origin of the universe. 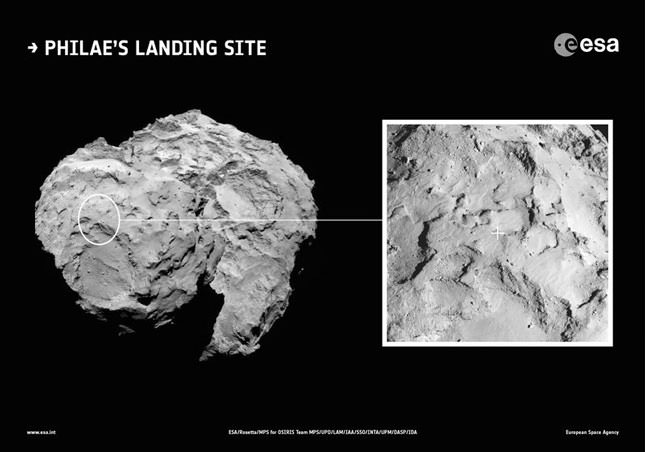 The European Space Agency celebrated the cosmic achievement after sweating through a tense seven-hour countdown that began when the Philae lander dropped from the agency's Rosetta space probe toward the comet as both hurtled through space at 41,000 mph (66,000 kph). 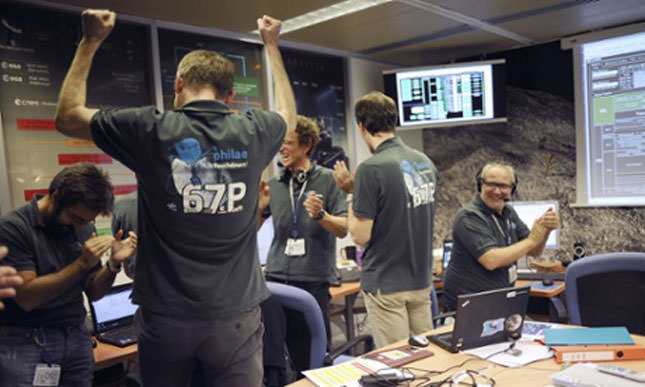 The agency then received a signal at 1603 GMT (11:03 a.m. EST) from the 100-kilogram (220-pound) Philae lander after it touched down on the icy surface of the comet named 67P/Churyumov-Gerasimenko. Philae had drifted down to the comet and latched on using harpoons and ice screws.

"We definitely confirm that the lander is on the surface," said flight director Andrea Accomazzo.

While further checks are needed to ascertain the state of the lander, the fact that it is resting on the surface of the speeding comet is already a huge success. It marks the highlight of the decade-long Rosetta mission to study comets and learn more about the origins of these celestial bodies.

The head of the European Space Agency underlined Europe's pride in having achieved a unique first ahead of its U.S. counterpart NASA.

"We are the first to have done that, and that will stay forever," said ESA director-general Jean-Jacques Dordain.

Scientists have likened the trillion or so comets in our solar system to time capsules that are virtually unchanged since the earliest moments of the universe.

"By studying one in enormous detail, we can hope to unlock the puzzle of all of the others," said Mark McCaughrean, a senior scientific adviser to the mission.

Rosetta and Philae now plan to accompany the comet as it races past the sun and becomes increasingly active in the rising temperatures. Using 21 different instruments, the twin spacecraft will collect data that scientists hope will help explain the origins and evolution of celestial bodies, and maybe even life on Earth.

"The science starts the minute we get down to the ground," McCaughrean said.

The landing Wednesday capped a 6.4 billion-kilometer (4 billion-mile) journey begun a decade ago.

Rosetta, which was launched in 2004, had to slingshot three times around Earth and once around Mars before it could work up enough speed to chase down the comet, which it reached in August. Rosetta and the comet have been traveling in tandem ever since.

The mission will also give researchers the opportunity to test the theory that comets brought organic matter and water to Earth billions of years ago, said Klim Churyumov, one of the two astronomers who discovered the comet in 1969.

Earlier Wednesday, ESA controllers clapped and embraced at mission control in Darmstadt as they got confirmation that the unmanned Rosetta had successfully released the 220-pound (100-kilogram), washing machine-sized Philae lander.

During the descent, scientists were powerless to do anything but watch, because the vast distance to Earth 500 million kilometers (311 million miles) made it impossible to send instructions in real time. It takes more than 28 minutes for a command to reach Rosetta.